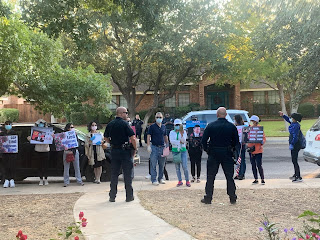 (Midland, TX—Nov. 3, 2020) China Aid Association has released a letter written by President and Founder, Pastor Bob Fu, to the man behind the recent harassment campaign.

The letter can be read in full here. Below is the full press release.
###
For immediate release
November 3, 2020
China Aid Association
Contact: Logan Carmichael – [email protected]
Julian Marley – [email protected]
(Midland, TX) President and Founder of China Aid Association, Pastor Bob Fu, has sent a letter to Mr. Guo Wengui, also known as Miles Kwok, demanding a full retraction to the accusations, slander, and death threats made against him.
Since September 26, 2020, protesters have gathered outside of Fu’s home under the instruction of Guo. Using his sites GNews and GTV, Guo has repeatedly encouraged his followers to escalate the harassment and use violence against Pastor Fu who he calls a “fake pastor” and “CCP spy.”
The threats made against his life were deemed credible by federal agencies leading the Fu family to go into hiding under police protection. They have not returned to their home in a month.
“You have trampled day after day, week after week, on my reputation and my livelihood,” Pastor Fu writes to Guo. “You have spewed falsehood and waged a campaign of deceit; your defamatory statements have provoked threats of actual violence against me and my property.”
He continues, “Accordingly, I, Xiqiu (Bob) Fu, hereby demand forthwith a full and complete retraction and disavowal of every one of the above inflammatory and unfounded charges against me and my organization, ChinaAid… I reserve the right to pursue all remedies that are afforded to me by the laws and Constitution of the United States and the State of Texas”
As a well known Chinese dissident and ordained pastor, Fu has worked tirelessly to advocate for religious freedom throughout China. His reputation of walking with the persecuted faithful in China has been upheld by the vocal support of United States Senators, Members of the U.S. House of Representatives, United States Ambassadors, and various human rights organizations.
Since its founding in 2002, ChinaAid and Bob Fu have been committed to promoting religious freedom and rule of law for all in China. To support and get involved with this mission, please visit ChinaAid’s website.
###
ChinaAid exposes abuses in order to stand in solidarity with the persecuted and promote religious freedom, human rights, and rule of law. If you wish to partner with us in helping those persecuted by the Chinese government, please click the button below to make a charitable donation.