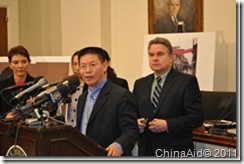 The following is the full text of ChinaAid founder and President Bob Fu’s remarks at a congressional press conference on Jan. 18, 2011 on “Human Rights in Hu Jintao’s China.”

Thank you, Congressman Smith and Congressman Wolf. Thank you all for coming to share this moment.

First of all, I commend the speech made by Secretary Clinton last Friday (at) the State Department. After nearly two years of silence in the public setting, a senior official of the Obama administration has finally spoken the names (of) Gao Zhisheng, Chen Guangcheng, and Hu Jia.

Secondly, I think I would still disagree with her overall tone and assessment of U.S.-China relations. She said that China and the U.S. are in the same boat, that we will rise together and fall together. But a regime that imprisons many people of faith in labor camps (and) in prisons in China should not be qualified to share the same boat with a democracy. It totally disregards the rules, regulations, universal values of this boat.

It is time to change course. As long as Mr. Gao Zhisheng is still missing and brutally tortured for simply promoting human rights and rule of law, it is not appropriate to call that regime an equal partner in the same boat. Mr. President, 150,000 people from all over the world, from over 185 nations, have spoken up, saying, “Free Gao! Let him come to the United States to be reunited with his wife and two children.”

I remember two years ago when I was in Bangkok, I tried to help his family resettle. I saw the scars of Mr. Gao’s daughter, left by her two attempts at suicide, because she could not endure the suffering of listening to the torture stories of her dad.

It is not too late to change course before we repeat what happened in the 1930s in Europe. I understand that economics and security are all important issues. But a regime that would torture one of the most prominent Chinese constitutional law scholars, Dr. Fan Yafeng, is not worthy to be recognized as an equal partner in this boat. 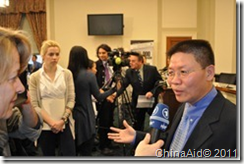 Human rights and religious freedom should be treated as just as important as economic and other interests. As long as Mr. Chen Guangcheng is still being jailed in his home, as long as Dr. Wang Bingzhang and Mr. Ping Ming are still serving life in prison for simply being veterans in the fight for human rights and democracy, as long as Uyghur Christian Alimujiang Yimiti is still serving a 15 year sentence since 2009 for simply being an underground independent church Christian, as long as there are prisoners of faith like Li Heng, who was tortured to death after his long-time imprisonment for the human rights cause – the “same boat” idea will do more harm to this country and to the world at large if we continue to carry out (U.S.) policy according to that vision.

I think it is time to really change course. Thank you very much.