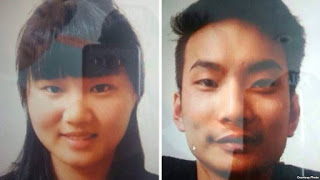 (Wenzhou, Zhejiang—Nov. 1, 2017) After four months of uncertainty, the families of two Chinese missionaries martyred by ISIS in Pakistan recently learned that authorities found their remains.

Since ISIS militants killed 24 year-old Li Xinheng and 26 year-old Meng Lisi in Pakistan, where they served as missionaries, their families have been waiting for officials to find their bodies and confirm their deaths. The abductors shoved the pair into a car along with a third victim, a female missionary who they later ejected from the vehicle due to a lack of space. She survived, but Meng and Li went missing for weeks, only to resurface weeks later in video footage that brutally shows their alleged murders.

In September, the families learned that authorities found two bodies, and one was confirmed to be Li.

“We are greatly grieved,” Li’s parents said. “We are not able to go to Pakistan to deal with all the follow-up issues. We authorize the Chinese embassy in Pakistan and the Chinese consulate in Karachi, so that they may have the full rights to deal with all the issues concerning our son’s body and everything related and bring his ashes back to us.”

Because authorities still need to confirm the identity of the other body, Meng’s parents received a notice from China’s security department asking them to cooperate with the DNA identification process.

Despite the international outrage stirred by their capture and subsequent deaths, the Chinese government failed to investigate or lend the Pakistani government assistance with their rescue efforts. Instead, the Communist Party turned scrutinizing eyes on two churches thought to be affiliated with Meng and Li. One of them, a Korean church that runs a school devoted to training prospective missionaries to Muslim countries in the various aspects of religion, history, and culture, received blame for their role in helping the two victims. Both churches have been under extensive pressure, and four Christians were summoned for interrogation. Additionally, all Christians who held important positions were placed under surveillance, and two church members, identified only as Uncle Z and Brother W, were detained for several days.

As the Chinese government spread propaganda demeaning the two martyrs and investigated their relatives, churches excommunicated their families.

ChinaAid exposes abuses, such as those suffered by Li and Meng and their families, in order to stand in solidarity with persecuted Christians and promote religious freedom, human rights, and rule of law.