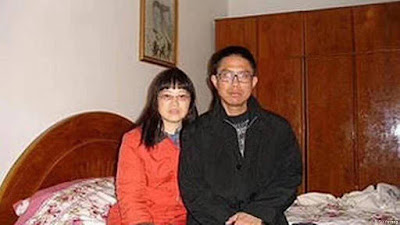 Two of his supporters, Chen Wei and Tian Hui, gathered to welcome him back into society but were detained by officials.

In all, Liu has spent a total of 21 years and 10 months behind bars since 1989. The government first took him into custody in 1991 for his involvement in the Tiananmen Square democracy protests. He served two-and-a-half years in jail for “counter-revolutionary propaganda and incitement.”

He was detained again in July 1995 after he took part in a petition entitled “Drawing Lessons from Blood and Promoting Democracy and Rule of Law.” Two other petition supporters were activist Wang Dan and Nobel Peace Prize laureate Liu Xiaobo.

In March 1998, Liu Xianbin wrote an open letter to the Ninth National People’s Congress, demanding the improvement of human rights. The same year, the China Democracy Party was founded, and Liu Xianbin set up the Sichuan branch in the province’s capital, Chengdu.

In early 1999, Liu Xianbin was detained for a month in the Beijing Detention Center. He was sent home and put under house arrest. On July 7, he was criminally detained in Suining, Sichuan.

He was convicted of “subversion of state power” on Aug. 6, 1999, by the Suining Intermediate People’s Court. The court sentenced him to 13 years’ imprisonment and three years’ deprivation of political rights. He was released early on Nov. 6, 2008, for good behavior.

He was detained again on June 27, 2010, and sentenced to a 10-year prison term on March 25, 2011, for “inciting subversion of state power.” He received this charge because of articles criticizing Chinese authorities, which he submitted to overseas websites and magazines. He also received a two-year deprivation of political rights and four months of probation.

During his latest prison term, Liu Xianbin was one of ChinaAid’s China18. This group consists of prisoners who have faced severe adversity for their promotion of freedom in China.