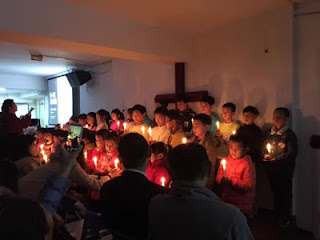 
(Bijie, Guizhou—July 13, 2019) The director of the Dafang County Ethnic and Religious Affairs Bureau in China’s southern Guizhou province told a church in the region that it is illegal for parents to teach Christian hymns to their children and spread Christian thought.

The church, which is located in the countryside, was raided by a law enforcement officers recently, according to a video clip posted online. The officials gave the church an administrative penalty notice, and when the Christians asked what law they broke, the Bureau’s director, Xie Mingxing, said, “It is illegal for you to teach your children to sing hymns and to spread [Christian] thoughts.”

Religious persecution throughout Guizhou has escalated in the past few years, with provincial authorities devising a new rule that all certified members of Christian clergy should renew their certification each year in order to more strictly oversee compliance with the Communist Party. Dafang County also requires that church personnel should also participate in an annual inspection, renew their certificates, and participate in training, self-evaluation, and exams as part of a holistic evaluation. The content of the training includes familiarization with China’s state-run Christian church network, the Three-Self Patriotic Movement, China’s religious rules and policies, and the nation’s attempts to “Sinicize” Christianity.

The Sinicization of religion has been a common theme under the administration of current Chinese President Xi Jinping. Referring to “religion with Chinese characteristics,” Sinicization endeavors to alter religion and religious practice in order to coincide with Communist Party ideals and implant nationalism in the center of religious life. In order to do this, the Chinese government has been imposing increasingly strict measures on religious sites and forcing Christians who attend government-run churches to sing patriotic songs in their worship services and hear government affiliates preach propaganda alongside the pastor’s regular sermon. Additionally, all church activities must be approved by the government, and children under the age of 18 are not permitted to attend a service or practice a faith.