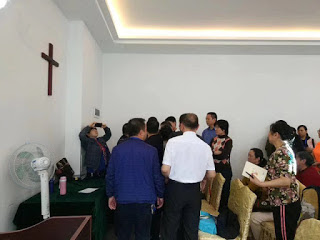 Guiyang Ren’ai Reformed Church in the past.
(Photo: ChinaAid resource).

(Guiyang, Guizhou Province—March 17, 2021) On the morning of March 16, Chinese Communist Party (CCP) authorities, which included the Minzong Bureau and the Public Security Bureau, stormed the Guiyang Ren’ai Reformed Church and “escorted” approximately a dozen Christian brothers and sisters away from the service. Later that day after 5 p.m., when Elder Zhang Chunlei visited the police station to ascertain the situation, police also summoned him.
At this time, CCP officials continue to detain Elder Zhang as well as several Christians they seized on Tuesday.

Bob Fu, PhD, ChinaAid president, requests that Christians intercede in prayer for these brothers and sisters in the faith of Jesus Christ.

Please pray for Elder Zhang and from Guiyang Ren’ai Reformed Church, and ask the Lord to be with them… to keep them safe in body and soul.

More on this story as CCP receives further notifications.

Pray for All Men
Therefore I exhort first of all
that supplications, prayers, intercessions,
and giving of thanks
be made for all men…
~  Timothy 2:1 (NKJV)
China Aid exposes abuses in order to stand in solidarity with the persecuted and promote religious freedom, human rights, and rule of law. If you wish to partner with us in helping those persecuted by the Chinese government, please click the button below to make a charitable donation.