China Aid Association
(Urumqi, Xinjiang–Jan. 23, 2013) The wife of jailed Uyghur Christian leader Alimujiang has had her short, monthly visits with her husband severely curtailed, and was to travel to the prison on Wednesday in hopes of seeing her husband, who was sentenced to 15 years in prison because of his religious beliefs.

Alimujiang is serving his prison term at the Xinjiang No. 3 prison, and his wife, Gulinuer, had been able to visit him once a month for 20 minutes. However, that’s now been reduced to once every three months and for only 10 minutes. Alimujiang called her on New Year’s Day, saying he hoped that he and their two sons could visit him. They planned to go to the prison on Wednesday and hoped the prison authorities would allow them to visit. 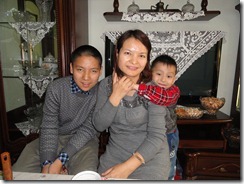 (A recent photo of Gulinuer and their two sons)

ChinaAid expresses its shock at this latest persecution of Alimujiang and his family and condemns the Xinjiang authorities for this heartless decision. ChinaAid is deeply suspicious of the administrative abilities of the Xinjiang authorities and of their motivations for this decision, which can only draw negative attention. This combination of weak government administration and its willful violation of the law is a sign that Xinjiang’s situation will continue to deteriorate. ChinaAid urges the new Chinese leadership to promote the rule of law by unconditionally releasing Alimujiang as soon as possible.

ChinaAid also urges people of conscience in China as well as worldwide to write letters to Alimujiang to express their concern for his situation. The address is:

Then on Jan. 12, 2008, the Kashgar Municipal Public Security Bureau placed Alimujiang under criminal detention on suspicion of “inciting the secession of the state” and “illegally providing state secrets to foreigners.”  On Feb. 20, he was formally arrested by order of the procuratorate.

On Sept. 12, 2008, the U.N. Human Rights Council’s Working Group on Arbitrary Detention reached a decision with regard to Alimujiang’s case. In its Document No. 29 for 2008, it determined that Alimujiang was arbitrarily detained.

On Aug. 6, 2009, the Kashgar Intermediate Court secretly sentenced Alimujiang to 15 years imprisonment on the charge of “illegally providing state secrets to a foreigner.” The court did not notify Alimujiang’s wife or his attorney, Mr. Li Dunyong, of the verdict and sentence until Oct. 27.  Alimujiang appealed and was represented by the prominent human rights attorney Mr. Li Baiguang.

On March 16, 2010, the Higher People’s Court of Xinjiang Uyghur Autonomous Region upheld the lower court verdict of Kashgar District Intermediate Court at a closed hearing during which Alimujiang’s attorney to denied permission to argue his case.  Alimujiang was sentenced to 15 years in prison and five years deprivation of political rights.

On April 12, 2010, Alimujiang’s wife Gulinuer received a phone call notifiying her Alimujiang had been transferred from the Kashgar Detention Center to serve his sentence at the Xinjiang No. 3 Prison.

In November 2010, Xinjiang Higher People’s Court accepted the appeal filed by Alimujiang’s wife, Gulinuer, and his mother, Wuxiuerhan, and decided to retry Alimujiang’s case of “disclosing top state secrets.”  At the request of his family members, Beijing’s Gongxin Law Firm, which had been representing Alimujiang throughout this case, sent its attorneys, who arrived in Urumqi on November 17.  The head of this law firm is the prominent Christian attorney Dr. Li Baiguang, who has met twice with the U.S. President George W. Bush.

After Christmas 2010, Xinjiang Higher People’s Court notified Gulinuer that they had made a decision on this case on December 20 in a collegial panel.

In February 2011, Xinjiang Higher People’s Court notified Alimujiang Yimiti, who was already serving his sentence, that it was upholding his original sentence of 15 years imprisonment.