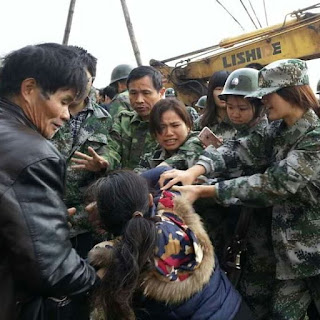 (Rome—Feb. 24, 2018) The Vatican seeks to mend its relationship with China next month, bowing to the will of the Communist Party and ignoring the ramifications it might have for Pope-loyal Catholics who do not attend officially-run churches.

A Chinese delegation, including China’s deputy foreign minister, plans to visit Rome in March, according to Italian newspaper Corriere della Sera. The paper also quoted someone with a front row seat to the talks, saying that any time before March ends would be a “good day” to cement the deal, Radio Free Asia said.

The main hallmark of the fracture between the Vatican and the Chinese government roots itself in the Party’s insistence on ordaining clergy unrecognized by the Pope. Such bishops and priests serve in China’s government-approved, yet state-censored, Catholic congregations, while clergy who ally themselves with the Vatican minister over unofficial churches that are often persecuted. On the principle that only the Pope can appoint bishops, the Vatican excommunicates anyone who received Communist Party ordination, Radio Free Asia said.

While the mending of this relationship would allow the Vatican and the Communist Party to collaborate on the appointing of clergy—with the Pope either approving or vetoing China’s nominations—it has already resulted in persecution. Several bishops who operate under the approval of the Vatican were asked to step aside to make room for excommunicated bishops who possess the ordination of the Chinese government.

As a result, many Vatican-loyal Catholics fear the alliance between the Pope and the Communist Party.

Furthermore, the partnership might propel China’s persecution of unofficial Catholic churches. Under the new provisions of China’s Religious Affairs Regulations, which went into effect on Feb. 1, churches operating outside of the state must submit to the government’s censorship or face forced closure. Since the Vatican is already allowing China to replace its own bishops with state-approved ones, there is no guarantee that it will step in to prevent China’s plans to crackdown on churches. Rather, China might feel emboldened in its persecution of Catholics if its relationship with the Vatican is restored.

ChinaAid calls on Pope Francis and the leaders of the Vatican to reject any deal from China that does not safeguard the rights of all Chinese Catholics, many of which have undergone persecution to remain loyal to The Holy See. Moreover, we advise the Pope to use his renewed connection to Chinese officials to push for the rights of all Christians to be upheld. This will promote religious freedom, human rights, and rule of law.