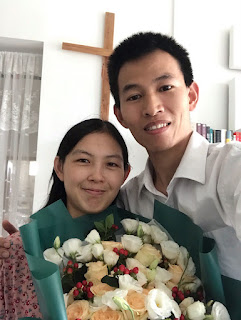 (Chengdu, Sichuan Province—September 08, 2021) On September 6, 2021, police released Dai Zhichao, the leader of “Wading,” a small group of Early Rain Covenant Church (ERCC), and He Shan, a member of the group, from the detention center. Chinese Communist Party (CCP) authorities had detained both Christians 14 days for worshipping at home. Typically, when officials release arrested Christians, others of the Church pick up Brothers and Sisters at the detention center with bouquets, welcoming them as though they are triumphant warriors. Usually, they take a group photo in front of the detention center.

Since the 129 crackdown, CCP authorities have forced Early Rain Covenant Church members to disband, and for a long time have watched, followed, and monitored Church congregants. As a result, Church members have felt compelled to meet in small groups. To even watch the Church’s online service together, members of each small group must implement extreme means to avoid police officers’ surveillance. Nevertheless, when community informants disclose spots where small groups gather, police raid them, forcing small groups to move frequently.
Police have regularly targeted the Wading group this year and raided their meeting spots multiple times. They have transported group members, including Brother Dai to the police station numerous times, as well as threatened and beaten some of them. This July, CCP authorities installed a camera at the door of Brother Dai’s place so they could constantly monitor and track him.

On the morning of August 22 during Early Rain Covenant Church’s Sunday service, police officers illegally raided the Wading group’s meeting spot in Chenghua District. They arrested 28 attendees, including children, and transported them to their station. Several officers beat Brother Dai,, and Brother Shu. One officer also grabbed a congregant’s cell phone. Authorities administratively detained Brother He and Brother Dai 14 days and fined them 1,000 yuan (154.70 United States Dollars). When Brother Dai returned home, he learned that police had detained him and Brother He the same day.

Authorities had detained Brother He for hosting the Wading group at his place. At the detention center, he thanked God when he prayed. One prisoner detained for using drugs felt confused and did not understand why Brother He thanked God for being detained. This man told Brother He, “We all in the cell deserve to be in custody except for you. You should not be detained.”

CCP authorities detained Brother Dai on a charge of “continuing to host events after registration is revoked,” an unprecedented, absurd indictment. After arriving home, Brother Dai greeted Church Brothers and Sisters, and told them that he did alright at the detention center; that it was better there than in Chengdu Detention Center. Meanwhile, personnel from the Public Security Bureau, State Security Department, and the community stressed Brother Dai’s wife and children, relentlessly harassing them at the entrance of their rented apartment. Shortly after Brother Dai left the detention center, he had to speak to an official at a related department of the complex. That representative told him that he and his family had to move.

Government authorities gave me a two-week retreat because the small group worshipped at home on August 22. They also detained Brother He, the owner of the home.

I just returned today, and know I have a long road ahead. May the Lord lead me.

Thank you all for your thoughts and intercessory prayers.

Thank God for His grace.

###
And the grace of our Lord
was exceedingly abundant,
with faith and love
which are in Christ Jesus.
~ 1 Timothy 1:14  (NKJV)
China Aid exposes abuses in order to stand in solidarity with the persecuted and promote religious freedom, human rights, and rule of law. If you wish to partner with us in helping those persecuted by the Chinese government, please click the button below to make a charitable donation.