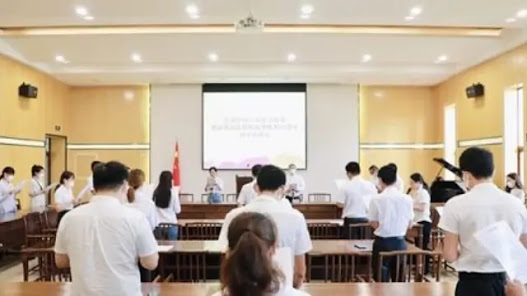 CCP: Christians must not honor their own martyrs, but honor Red Army martyrs—or else

They cannot remember their own martyrs
but should pray for the Communist soldiers who died in the war with Japan.

Christians in China are forbidden to pray for their martyrs. Those killed by the CCP obviously cannot be commemorated, but even those martyred for their faith in Imperial China are not remembered, lest the devotees make unpleasant comparisons with later killings.

However, there are times when all Christians throughout China should mandatorily celebrate martyrs. Last week at Fujian Theological Seminary members of the local Three-Self Church were invited to celebrate the martyrs of what in China is called the “People’s War of Resistance Against the Japanese Aggression.” Jesus as King of Peace was also prayed for the “peaceful reunification” of China, with an eye on Taiwan.

It did not happen in Fujian only. In fact a directive was sent to all churches that are part of the government-controlled Protestant Three-Self Church, the only Protestant church with a legal existence in China, reading as follows:

“To the Christian churches in each province, autonomous region, or municipality directly under the central government.

Local churches and congregations may, according to the actual local situation, carry out relevant peace prayer activities in a small and decentralized form, in line with the local requirements for prevention and control of the new COVID epidemic, to further promote the fine tradition of patriotism and love of religion and to demonstrate the good image of peace-loving Christianity in China.

Local churches are requested to submit evidence of the relevant activities (text, video and photo materials) to the Media Ministry Department of the China Christian Council by September 10.”

The last sentence means that if some church declines the “invitation” and does not quickly submit evidence that the celebration of the martyrs was held, there will be consequences.

In September 1945 Japan’s troops in China surrendered after a bloody war. Both Nationalist and Communist troops, together with the international powers who fought Japan in World War II, participated in the campaign. However, the official commemorations only celebrate the martyrs of the Communist Red Army, minimizing both the role of the Nationalists and the fact that the Communists took advantage of the war to attack Nationalist units, preparing their eventual victory in the Civil War.

Christians are prevented from honoring their own martyrs. But they should honor the martyrs of the Red Army or the CCP—or else.

In the light of China’s repeated disregard for religious freedom, a universal, critical contemporary concern, … I pray that one day, China, my beloved birth country, not only considers [Baorong Duoyuan*] but implements its inherent ideas to facilitate and help ensure religious freedom for all.

Standing for religious freedom not only reflects a legal or moral obligation, but a practical imperative. Freedom of religion envelopes individual freedom but even more so, a dearth of religious freedom for all jeopardizes the well-being societies throughout the world. Religious freedom links to robust democracies, diminished violence, as well as greater prosperity and stability. Nations that abuse religious liberty often incubate intolerance, extremism, poverty, insecurity, violence and repression. In our increasingly global world, connected by economic, political, and security interactions as well as concerns for human rights and religious freedom, it becomes critical to recognize that as the local impacts the global—the global impacts the local. It also becomes vital to help eradicate persecutions inflicted because of one’s beliefs—locally and globally.

Without freedom of as well as freedom from religion, a fundamental foundation for human rights—no other liberty can flourish. For the sake of our local and global worlds, instead of burying reports of persecution in China, we need to acknowledge them. We must not only recognize cries for help from those being persecuted for their religious faiths, however—we must respond with compassion . . . with help . . . .

* my contextualized model of principled pluralism

**Excerpts used by permission from Wipf and Stock Publishers,
The Politics of Inclusive Pluralism: A Proposed Foundation for Religious Freedom….
###

Others were tortured,
not accepting deliverance,
that they might obtain a better resurrection.

~ Hebrews 11:35b (NKJV)
China Aid exposes abuses in order to stand in solidarity with the persecuted and promote religious freedom, human rights, and rule of law. If you wish to partner with us in helping those persecuted by the Chinese government, please click the button below to make a charitable donation.