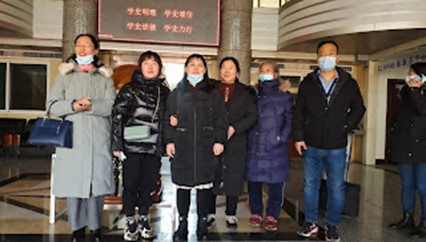 The five sentenced Christian co-workers of Taiyuan Zion Reformed Church had traveled to Kuala Lumpur (Malaysia) to attend the “Gospel and Culture Conference 2020” that Stephen Tong Tjong Eng in Kuala Lumpur, Malaysia, organized. During the morning of July 28, 2021, local police criminally detained the five under the charge of “illegally crossing the national border.” Later, authorities formally arrested them.

CCP authorities arrested the five conference participants to warn other Christians to keep a distance from Pastor Tong. Although each targeted Christian had legally obtained their passports and visas to attend Pastor Tong’s conference in Malaysia from January 28 to 31, 2020, officials charged them with the fabricated indictment one and a half years after the conference. Pastor Tong, an international, influential Chinese pastor, who hosts conferences that attract Chinese Christians from all over the world, openly criticized the CCP for its religious persecution. To retaliate, the CCP banned his sermons in China.

On December 28, when Fenyang Court held a trial for the five Christians, the court charged each with “illegally crossing the national border.” Officials allowed lawyers and family members to attend the court session. However, the court did not immediately announce its verdict. The accused Christians testified of their faith during the trial and said that God was with them the whole time. The Christians even shared the gospel with the officiating judge. This encouraged others in the courthouse to hear and learn about God.

On December 29, 2021, Pastor An’s wife received a notice of arrest for him that the Fenyang Public Security Bureau issued on December 28. The notice stated:

Arrest approved by Fenyang City People’s Procuratorate, Department 2 [2021] No. Z14, at 10:00 on December 28, 2021, our bureau executed the arrest of An Yankui on suspicion of illegally crossing the national border; he is currently detained at the Xiaoyi City Detention Center.

Ms. Guo, Brother Zhang’s wife and member of Taiyuan Zion Reformed Church, also received a notice of Zhang’s arrest that the Fenyang City Public Security Bureau issued. Authorities charged Brother Zhang and Pastor An with the same charges, arrested them on the same day, and detained them in the same detention center. On the same day, the court opened the trials of Zhang Ligong and five other members of Taiyuan Zion Reformed Church in Fenyang. CCP officers charged Brother Zhang and Pastor An on suspicion of “illegally crossing national borders.”

According to the law, defendants of this kind of case usually receive no more than one year imprisonment. These five Christians have been detained for more than five months, so the court is not in a hurry to hold a trial.”

The Christian who received the shortest sentence will be released at the end of this month. The Chinese government demonstrated arrogance and rudeness toward its legal system by sentencing five Christians who traveled to another country with passports and visas. It remains unclear whether these five Christians will appeal.