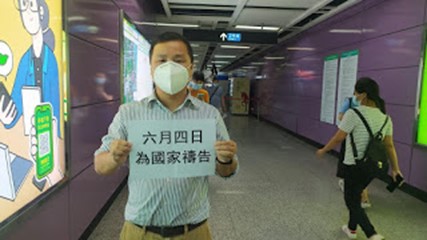 (Guangzhou, Guangdong Province—June 08, 2021) On June 4, the 32 anniversary of the June 4th Tiananmen Square Massacre, Gao Heng of Guangzhou Bible Reformed Church, stood at a station of Guangzhou Subway Line Two, holding a sign stating, “June 4, pray for the country.” Brother Gao also posted a picture of himself holding the sign to several social media venues, including his WeChat Moments, Weibo, and Facebook. He wrote the following on his Weibo page:

People usually attributed the cause of all social sufferings to the ugliness of politics and social systems. The root cause, however, evolves from the sinful nature of human beings. In terms of the sinful nature, no fundamental difference exists between us and decision makers, directors and executors.
I say, “Thank you, God. We are all sinners. But because of Your amazing grace, we have the opportunity to repent, accept Jesus Christ as our Savior, and become Your children.”

Around midnight on June 5, Brother Gao sent a message to one of his friends letting him know, “Someone’s knocking on my door.” Afterward, Brother Gao did not communicate with anyone. During the morning of June 7, when his church’s lawyer traveled to the local police station for information, the officer on duty directed him to check with substations. Although he did not find Brother Gao at the local police station, the lawyer learned from an officer that public transportation sub-bureau of Guangzhou municipal public security bureau authorities had criminally detained Brother Gao at Guangzhou Second Detention Center, and charged him with “picking quarrels and provoking trouble.” The police officer did not disclose information regarding the exact time of his detention. If Chinese Communist Party (CCP) authorities do not release Brother Gao during the duration of his detention [maximum of 37 days], they may arrest him when his current detention period ends.

Guangzhou Bible Reformed Church’s Pastor Huang Xiaoning informed Brother Gao’s father and sister of his detention and comforted them. He and others in the church ask Christians to pray for Brother Gao, and his father [not a Christian].

​Prior to this latest dentation, Brother Gao remained actively involved in Guangzhou Bible Reformed Church. He practices the Holy Bible’s teaching of “to act justly and to love mercy and to walk humbly with your God.” He also focuses on seeking justice in social, and public affairs. Brother Goa speaks up for injustice and helps petitioners protect their rights. As a result, police have summoned him in the past.

Late in 2020, Brother Gao contacted Zhang Qiang, a petitioner from Guangzhou, through WeChat to offer help. As a result, on December 22, 2020, at 11 pm, four police officers (two from Guangzhou Haizhu District Public Security Bureau, one from Panyu Luoxixincheng Police Station and one from Panyu Dashi Police Station) traveled to his home and summoned him to the local police station. For Zhang Qiang posting comments online, CCP officials detained him on December 1, 2020 under the charge of “suspected picking quarrels and provoking trouble.” This year on January 6, Guangzhou Haizhu District People’s Procuratorate approved Zhang Qiang’s arrest, officially charging him with “suspected picking quarrels and provoking trouble.” Officials have not yet revealed his trial date.

Brother Gao, a gentle and humble person, zealously shares the gospel. On Christmas night of 2020, he, Pastor Huang, and other Christians of his church shared the gospel on the streets. At that time, CCP officials had cancelled Christmas celebration events all over the country. 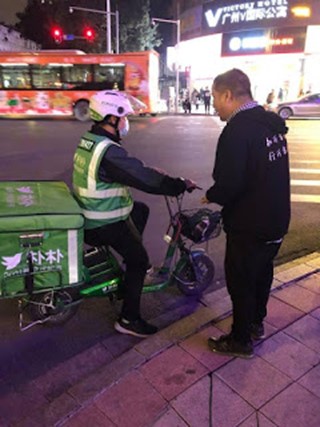 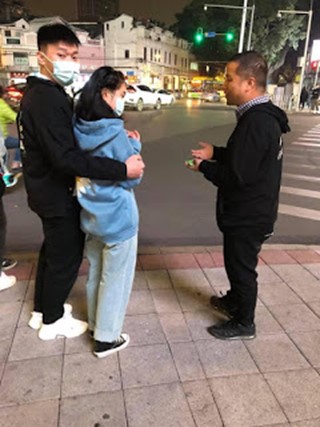 Brother Gao seizes opportunities to share the gospel with police officers and national security agents. In Dongguan on August 21, 2020, when police raided his church’s group of more than 10 Christians studying the Bible together, officers charged the group leader, Minister Yang Jun, with “spreading cult propaganda,” a crime the CCP considers one of their “strike hard” categories. Police transported Minister Yang and another two Christians to their local station. Officers released the two other Christians that night, but detained Minister Yang one day, charging him of “cheating and lying.”

The next morning, Brother Gao called the police station and asked, “Which article of the law did Yang Jun violate for sharing the gospel?” He also pointed out that police officers violated related articles in China’s Constitution regarding citizen’s religious freedom. During the phone call, Brother Gao said:

I hope you repent and believe in Jesus to avoid the future judgement.

On December 31, 2020, Brother Gao posted the message on his Facebook page. “Last night, compelled by conscience, I sent a text message to the police officer who summoned me last week.

The day after Doctor Li Wenliang (COVID-19 whistleblower) sent a message about COVID-19 in his classmates’ chat group, Wuhan police officers persecuted him. As a police officer, when you receive unreasonable tasks, I hope you will think about its absurdity, and follow your conscience.

Do not just follow every order blindly. Act justly and love mercy…. The following screenshot shows Brother Gao’s conversation with the police officer: 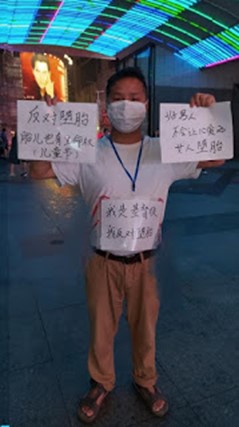 In the past, despite police regularly summoning him, Brother Gao has not only shared the gospel and spoke out against human rights injustices—he has continued to stand for and display signs stating truth.

~ Yubing, ChinaAid Special Correspondent
###
He has shown you, O man, what is good; And what doe
s the Lord require of you
But to do justly,
To love mercy,
And to walk humbly with your God?
~  Micah 6:8 (NKJV)
China Aid exposes abuses in order to stand in solidarity with the persecuted and promote religious freedom, human rights, and rule of law. If you wish to partner with us in helping those persecuted by the Chinese government, please click the button below to make a charitable donation.