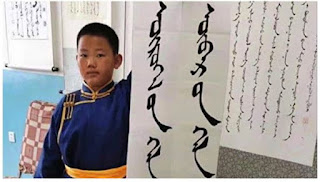 The Implementation Scheme of Using the Chinese Textbook issued by Inner Mongolian authorities on August 26 states that starting this autumn:

In response to the CCP’s “Implementation Scheme…,” Mongolian parents, students, and teachers across the Inner Mongolia Autonomous Region have protested, with photos and videos of them going viral. Three hundred employees of Inner Mongolian TV Station as well as faculty of the Normal University have signed a plea advocating for the protection of the Mongolian language.

The CCP dispatched police and public servants to each Mongolian household demanding they send their kids to schools. Otherwise, they would be fired. Authorities have also detained many who participated in demonstrations.

Yang Haiying said that he thinks the plan equals blatant cultural genocide and feels like reliving the Cultural Revolution. “In addition to the change of teaching content, authorities have censored Mongolian literature, and are replacing Mongolian pictures in textbooks with other pictures. In the new edition of the textbook, the first lesson starts: “I am a Chinese and the native language of Mongolians is Chinese.”

In addition to the CCP’s plan to assimilate the Mongolian language, Yang said, authorities forcibly change lifestyles, plunder resources, and repress faith, all actions that demonstrate cultural genocide. In 1981, Yang survived the massacre in the Cultural Revolution and the massive suppression which evolved from students’ protesting the “No. 28 document.” According to Yang, the cultural genocide policy equals the ongoing brainwashing in Inner Mongolia. Now, however, teenagers, youths, and others in China, not “foreign forces,” have taken a stand to speak up and protest.