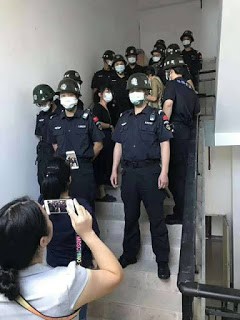 The reportedly “illegal religious venues” refer to those house churches who adhere to their beliefs and refuse to join the government-sanctioned Three-Self churches and do not register with the Religious Affairs Bureau. Xiamen municipal government officials started cracking down on these house churches in 2019. Since then, authorities continue to strengthen their means to control churches.

During the past two years, the Chinese Communist Party (CCP) banned numerous house churches. To persecute and pressure churches, officials have:

In response to the notice the Siming District United Front Work Department sent, Mang Xibo, minister of Xunsiding Church, said:” Praise the Lord for blessing Xiamen house churches with the crown of righteousness.”

###
Finally, there is laid up for me the crown of righteousness,
which the Lord, the righteous Judge,
will give to me on that Day, and not to me only
but also to all who have loved His appearing.
~ 2 Timothy 4:8  (NKJV)
China Aid exposes abuses in order to stand in solidarity with the persecuted and promote religious freedom, human rights, and rule of law. If you wish to partner with us in helping those persecuted by the Chinese government, please click the button below to make a charitable donation.