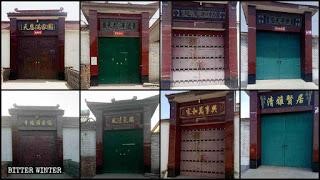 (Zhaojialing Village, Shanxi Province—Jan. 05, 2021) As part of the CCP’s crackdown on Christianity, Chinese Communist Party (CCP) officials are forcing Catholics in the village of Zhaojialing, Xiangyuan County, a nationally known pilgrimage site since the 19th century, to remove plaques, images, or banners with references to religion. Instead of referencing Jesus, Heaven, Saint Mary, and the Saints, for example, authorities have “urged” Catholics living in Zhaojialing village to display secular phrases or images.

Many traditional Chinese houses have displayed lintel plaques on their courtyard doors referencing God’s grace and blessings. Chinese authorities began to rectify the door plaques of Catholics’ private residences with religious references, however, from the beginning of May. They have forced Catholics to replace phrases with religious keywords to secular ones. Examples include:

In addition to altering door plaques, government officials have changed the wording on road signs in the village, for example:

CCP officials have also replaced scriptures previously displayed on both sides of the streets with slogans of praise for the Chinese Communist Party.

According to Bitter Winter,

It is not the first time that Catholic images and signs have been eliminated, including in churches of the government-controlled Patriotic Catholic Church. For example, in May this year, images of saints and a stele of martyrs in a government-controlled Catholic church in Xingtai city in the central province of Hebei were covered up.

Since the CCP launched its “Sinicization of Christianity” movement, authorities continue to increasingly remove, replace, and ruin religious symbols and signs. Local government authorities have also demolished, confiscated, and repurposed church buildings, as well as destroyed crosses, and stelae* in Henan, Zhejiang, Jiangxi, Xinjiang, Inner Mongolia, and throughout China.
As the CCP targets the Catholic Sanctuary of Our Lady of Zhaojialing and other religious institutions, trying to gradually align religion with the official interpretation of Chinese culture, attempts to control religion in China will change the way of life for Chinese Christian churches. CCP control tactics, however, will unlikely cut off their influence and growth. The CCP’s attempts at assimilation may compel a semblance of loyalty to the party from the lips of some Chinese Christians—but not from their hearts.
*pillar or standing stone primarily used to mark graves but may also symbolize a dedication, demarcation, or commemoration.
###
clearly you are an epistle of Christ,
… written not with ink
but by the Spirit of the living God,
not on tablets of stone
but on tablets of flesh,
that is, of the heart.
~ 2 Corinthians 3:3 (NKJV)