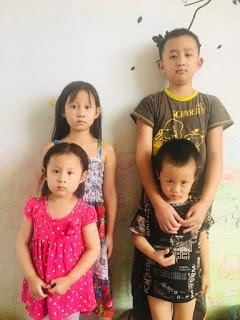 On the afternoon of his arrest, Mr. Wang and his family traveled to his hometown, Chuxiong, Yunnan Province to visit his ill father. That night a squad of approximately 50 armed police surrounded the Wang residence and began banging on the door. Mr. Wang Zang and Ms. Wang quickly went to investigate, with Mr. Wang taking his phone to record the situation.

When unidentified police officers requested that Mr. Wang Zang open the door, he hesitated. As the banging intensified, Mr. Wang Zang repeatedly yelled out “robbers.” When the door suddenly slammed down inside, five officers pinned Mr. Wang to the floor, twisted his arms behind his back, and handcuffed his wrists together. As the police forcibly held him down with their elbows and knees, Mr. Wang cried out in pain and momentarily passed out.
When Ms. Wang, terrorized, started screaming, an officer forced her to the floor and gagged her. As the children tried to hide in the floor-to-ceiling curtains, they also cried loudly. At this time, many neighbors awakened by the screams got out of bed to see what was happening. As a warning for neighbors to keep their distance, police turned on sirens.
When Mr. Wang’s mother, younger brother, and his sister-in-law rushed to help, police also arrested them. Officers then transported Mr. Wang’s family, six adults and four children to the police station to spend the night with him. Police also confiscated each person’s cell phone and deleted their WeChat accounts to prevent any contact with the outside world.
CCP authorities released all those they had arrested, except for Mr. Wang the next afternoon. The station chief warned Mr. Wang’s family members as they left, “You’re forbidden to disclose any information about Wang Zang .If you do, you’ll be severely punished.”

According to Chinese Human Rights Defenders:

Chuxiong Yi Autonomous Prefecture Procuratorate indicted Wang Zang and Wang Li on charges of “inciting subversion of state power” on December 14, 2020. The case has been transferred to Chuxiong Yi Autonomous Prefecture Intermediate Court. Their lawyer had been notified orally through a telephone call and at the time of writing continues to be denied access to his clients.

CCP authorities regularly use the vague charge of “inciting subversion of state power” to imprison individuals who exercise their freedom of expression and association with liberty.

###
God has spoken once,
Twice I have heard this:
That power belongs to God.
~ Psalm 62:11 (NKJV)
China Aid exposes abuses in order to stand in solidarity with the persecuted and promote religious freedom, human rights, and rule of law. If you wish to partner with us in helping those persecuted by the Chinese government, please click the button below to make a charitable donation.