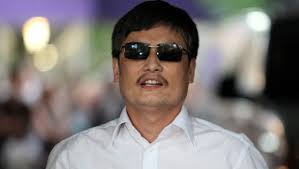 Good evening, honored guests. I wish to give my thanks to the Oxi Day Foundation for giving me this award. I feel incredibly fortunate and honored to be able to stand here and to accept this award, on behalf of the heroes who, in the face of brutal power, bravely defend the truth and stand by their principles — who dare to say No to lies and violence.

(File Photo: Chinese activist Chen Guangcheng speaks to the media upon arriving on the campus of New York University May 19, 2012, in New York City./ Getty Images )

Over the last several years, the so-called “stability maintenance” system operated by the Chinese government has kept its foot on the necks of the Chinese people, and its legal system is backsliding; now things are practically as bad as they were during the days of the Cultural Revolution, when lawlessness was the norm. What’s more, party and government officials see their unchecked abuses of power and illegal actions as proof of their competence rather than something to be ashamed of. In both cities and the countryside, human rights violations of all varieties abound: violence in enforcing family-planning policies, forced demolitions, kidnapping of petitioners before they could reach government offices to air their grievances, and farmland grabs. Human rights defenders are disappeared, sent to labor camps, locked up in psychiatric hospitals, or detained in illegal jails.

Chinese officials operate in a black box where they can keep a tight lid on domestic news, block the Internet, and use violence to stop foreign reporters from doing their job. These officials, with blackened consciences, can do as they please and suffer no consequences from Chinese law. That’s how we end up with illegal “black” jails and the kidnapping of activists, who are taken away with their heads covered with black hoods. The malicious stability maintenance system has turned the government into a mafia organization, leading to seething discontent across China and mass uprisings.

History has already proven with innumerable examples that: So long as those in power do not safeguard social justice; suppress the expression of the people’s will and channels of free speech; keep the media muzzled and hold on to one-party rule; so long as the basis of their power is thuggish coercion to maintain stability, rather than legitimacy, China can only become more unstable in the long t. Indeed, China’s rulers understand this fact perfectly well. Precisely because they are so crystal clear about how this works, they stop at nothing when it comes to stifling the growth of a diverse civil society.

The hardliners in the Chinese Communist Party openly operate above the country and its laws in order to serve their own self-interest. To keep their hold on power, they have hijacked our country and government and do not stop at persecuting our people. They are leaders of our nation in name only; they’re closer, in reality, to our nation’s kidnappers.

To cast a quick look back, it appears that the Chinese people are, after thousands of years, still caught up in the kind of society you get when you toss together a backward feudal system on its last legs and oligarchical capitalism. What, we may ask, are the causes? It may be that we have been enslaved for so long and fear is very hard to overcome. But we will only own the future if we can conquer fear. This is the path down which China must travel in order for China to end its history of untrammeled lawlessness.

We can all benefit and learn from other parts of the world. Let us all learn from the Greek people from the 1940’s. When faced with powerful evil, let us take the first step to overcome fear, and resolutely dare to say No! For the last several years, both when I defended cases where the government used violence in carrying out family planning policies, and when I was in jail and under detention, I said No many times. I refused many things that officials had no right to ask, for which I suffered cruel and inhumane persecution. But, this did not scare the people into submission. On the contrary, an increasing number of people with their hearts in the right place realized that it is time to stand up and say No to powerful evil. If we look at Nazi Germany, Hitler was the head of what had been the strongest nation on earth. In today’s world, no dictator can hope to rival the superior strength Germany enjoyed. And yet the Greeks stood up and proved to the world, with their uncommon courage, that you don’t have to be afraid of an unjust and illegitimate power. The Greeks showed that simply by refusing to join the ranks of the oppressor, we overcome them.

At this moment, the people of China are waking up very quickly, and more and more people are no longer afraid. And this terrifies those in power more than anything else. Indeed, those in power have long since felt embattled; they’ve put up a calm facade to the outside world, but it’s far from the way they actually feel. The historical trend of liberal democracy is unstoppable. Even so, we cannot take things for granted. We have to shoulder the responsibility history has handed each of us, turn away from apathy and fear, and take action to save China from its kidnappers. For the sake of freedom, constitutional democracy, rule of law, and justice, let us act, and act quickly! Thank you.  (Washington DC, Oct. 25, 2012)