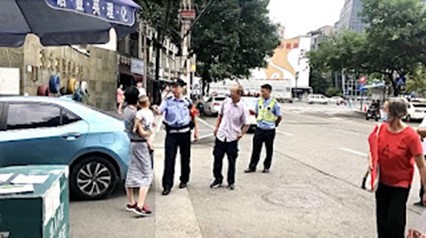 (Chengdu, Sichuan Province—September 03, 2021) During the evening of September 1, a group of police officers, national security agents, and other individuals who claimed to be homeowners in Jiaoda Garden Wuhou Community, threatened several renters, Christians from Chengdu Early Rain Covenant Church (ERCC). The group asked the renters to move out of their homes within three days. The following day, when Sister Shu Qiong drove back home, several officers from Jinyang Road Police Station stopped her at the gate entering the community and refused to allow her to enter. Next, police officers forcibly transported Brother Li Ying to their station.

Also, in the evening of September 1, police officers from Jinyang Road Police Station, with national security agents, and more than 20 people who claimed to be community homeowners knocked on doors to record residents’ identities. When they saw Christians from Chengdu ERCC, they asked them to move out in three days. Some elderly individuals wearing red armbands said:

On behalf of all homeowners of the community, we want to tell you that Christians are not welcomed here.

The leases for the homes the ERCC Christians had signed had not neared their contracts’ expiration dates.

Some of the threatening group targeted Sister Sun, currently pregnant. Almost three years previously, during the December 9, 2018 crackdown, she had been pregnant with another baby. When national security agents from Qingyang District and officers from Caojiaxiang Police Station broke into her home, they had drug her by her hair and interrogated her outside in the cold. This led to her experiencing a massive hemorrhage and miscarriage.

At about 4 pm on September 2, when Sister Shu drove back home, several officers from Jinyang Road police station stopped her at the community’s entrance gate and refused to allow her to go home. They asked her, “Are you a Christian?”

Sister Shu responded, “Yes, I am a follower of Jesus Christ.”

Police officers told her, “That is not allowed here.”

She told people passing by: “I am a follower of Jesus Christ. Everyone who believes in Him may have eternal life in Him. We have no religious freedom in China. These police officers will not allow me to go home because of my Christian belief.”

To the police officers, Sister Shu said, “You are doing illegal and violent law enforcement. You can arrest me if I have violated the law. I appeal for myself….”

At approximately 5 pm (one hour after police stopped Sister Shu at the community gate), officers seized another ERCC Christian. Police arrested this man for his comment, “Are you going to restrict my personal liberty?” Authorities charged him with “obstruction of law enforcement.”

Several police officers grabbed this Brother by his neck while shouting to him, “You must cooperate with the investigation!” After they pushed him into their police car, officers transported him to their station.

Shortly after 6 pm, Brother Li Ying’s wife, Shu Qiong, Hao Guiru, and several other Christians went to the police station to deliver food for their arrested Brother. Officers allowed him to leave around 7:30 pm.

ERCC Christians enjoyed a “love feast” after they returned home. Sister Shu quoted Psalm 23:5 to encourage each other:

You prepare a table before me in the presence of my enemies.
You anoint my head with oil; my cup overflows.

Several Christian families from ERCC live in Jiaoda Garden Wuhou Community. Most of these families who have two or more children homeschool their children together. During the morning of January 14, many police officers, national security agents, local school district administrators, and urban management officers raided the homes of Liang Huali’s family, Shu Qiong’s family, and Sun Ailun’s family. They searched the Christians’ homes and confiscated books and personal possessions, including Shu Qiong’s laptop, and another Christian’s twenty boxes of books. In the afternoon, officers summoned Liang Huali and Sun Ailun to their police station.

During the morning of August 22, police officers raided the Tashui group during their Sunday service and transported 18 adults and 10 children to their station. Officers assaulted Dai Zhichao, Shu Qiong, and her husband Wang Son. They detained Dai Zhichao and Li Shan for 14 days. On August 14, CCP authorities summoned Elder Li YingQiang in Deyang.

In the past two years, Chengdu Religious Affairs Bureau officials, national security agents, and police officers have spent a lot of energy and money, trying to destroy Early Rain Covenant Church. The Church, however, remains solid and strong, with more and more people believing in Jesus and being baptized in the Church. In addition, Christians from other parts of the country moved to Chengdu. All these indicate the CCP’s massive persecution campaign against Early Rain Covenant Church has failed.

~ Yu Bing, ChinaAid Special Reporter
###
No weapon formed against you shall prosper,
And every tongue which rises against you in judgment
You shall condemn.
This is the heritage of the servants of the Lord,
And their righteousness is from Me,”
Says the Lord
~ Isaiah 54:17 (NKJV)
China Aid exposes abuses in order to stand in solidarity with the persecuted and promote religious freedom, human rights, and rule of law. If you wish to partner with us in helping those persecuted by the Chinese government, please click the button below to make a charitable donation.