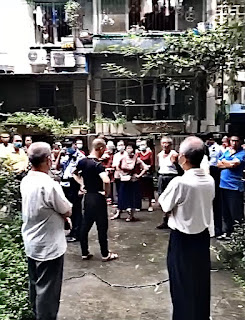 Chengdu authorities continue to harass Christians of ERCC; demand they move by September 03

(Chengdu, Sichuan Province—September 06, 2021) September 03 marked the third day that representatives from Chengdu City Wuhou District Public Security Department, State Security Department, and the local community harassed seven households of Early Rain Covenant Church (ERCC) and demanded that they vacate their rentals in Wuhou District Jiaoda Garden Wuhou Complex. Two days prior, on the evening of September 01, the precinct’s police station officials dispatched more than 20 self-claimed owners wearing red badges to search each home and warn Christian families that they would be evicted. These “owners” stated that speaking on behalf of the complex—Christians are not welcomed in the community, and they must move out within three days.

Police officers, accompanied by uncles and aunts,* threatened Christian residents, including Shu Qiong, Li Ying, Zhu Hong, Zhou Xiaoguang, and Sun Ailun. Sun Ailun, currently pregnant, had a miscarriage resulting from police violence during the massive arrest of ERCC congregants on December 9, 2018. Several aunts from the community scolded the Sun Ailun couple harshly. Xuan Bin filmed the exchange with her cell phone, however, police officers ordered her to delete the videos. When officers started to escort Xuan Bin away, Shu Qiong asked them to show the residents their warrants in accordance with laws. Otherwise, she stressed, officers should not take anyone away.

You can arrest me if I break laws. I can accept what you do if you do it in accordance with laws. However, you are not handling this in line with laws.

After 4 pm on September 2, police officers impeded Shu Qiong at the entrance of her complex when she arrived there, refusing to allow her to drive home. Even at 7 pm, the “jointly-violating-laws team” continued to harass each congregant’s family living in the complex. Later, around 5 pm, police also seized Brother Li, another resident, from the entrance. He had confronted police regarding their right to restrict one’s liberty. Police forcibly seized him, claiming he had been “obstructing law enforcement.” Officers released Brother Li around 7:30 pm.
On September 03, the community harassment team, accompanied by police officers, continued to harass, and threaten each Christian family. One Chengdu Christian posted “Questionnaire about ‘Sunshine Aunts’ evicting Christians” on an official WeChat account. The article questions:

Many readers commented, stating that this behavior violates Constitution Article 30. One Christian attorney stressed, “Habitatio is a natural right and a legal right, and it is not granted by a few representatives of owners. Owners have no right to ask other owners to move out if they do not infringe on others’ rights and interests.”

During the afternoon of September 03, police, State security officers, and community Red Guards warned seven Christian families to move out that day, the deadline. ERCC simultaneously sent out a prayer request, asking Brothers to intercede for Brothers living in Jiaoda Garden Wuhou Complex:
may the Lord grant them joy
so that they can suffer with Christ;
may the Lord help brothers
not repay evil with evil or insult with insult,
but with blessing,
because to this you were called
so that you may inherit a blessing.

* uncles and aunts: honorary title to seniors in Chinese culture

~ Yu Bing, ChinaAid Special Reporter
###
Therefore He [Jesus]
is also able to save to the uttermost
those who come to God through Him,
since He always lives to make intercession for them.
~ Hebrews 7:25 (NKJV)
China Aid exposes abuses in order to stand in solidarity with the persecuted and promote religious freedom, human rights, and rule of law. If you wish to partner with us in helping those persecuted by the Chinese government, please click the button below to make a charitable donation.