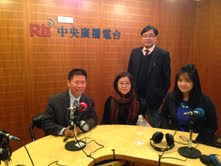 (Taipei, Taiwan—Dec. 2, 2013) In a continuation of the campaign, “China 16,” which aims to free 16 prisoners of conscience, four of the prisoners’ daughters, the brother of Chen Guangcheng, and ChinaAid founder and president, Bob Fu, testified at a hearing held by the Taiwan Association for China Human Rights on Monday about the group, which has grown to be the “China 18.”

The hearing was a part of a series of hearings, which aim to secure the release of 18 Chinese dissidents. The group sent video testimonies to the European Parliament hearing, which also took place Monday, and will testify again on Thursday (corrected Dec. 3), Dec. 5, at a hearing in Washington, D.C., held by the Committee of Foreign Affairs.

The group of prisoners grew by two after the Aug. 8 arrest of prominent rights defender Guo Feixiong (https://chinaaid.org/2013/08/china-aid-association-22-2013-china-aid.html) and the addition of Tibetan filmmaker Dhondup Wangchen.

Also part of the group are Guo Quan, who participated in a campaign to protect the rights of demobilized military officers; Guo Feixiong, a prominent rights defender; and Wang Zhiwen and Li Chang, both Falun Gong practitioners and former government employees detained for their religion.

The final three members of the China 18 are Tenzin Delek Rinpoche, a Tibetan monk accused of organizing a bombing in Sichuan’s provincial capital; Lobsang Tsering, accused, along with his uncle, a Tibetan monk, of intentional homicide relating to self-immolations in Tibet; and Dhondup Wangchen, a Tibetan filmmaker.

More information about the China 18 members can be found at www.china18.org.

The videos below were filmed for the European Parliament hearing.