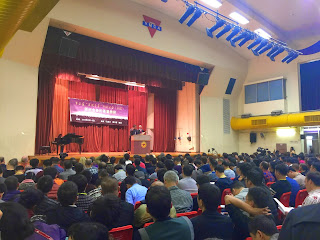 First, I want to report on some encouraging news; in early March, more than 1,800 Christian leaders from China participated in a four-day training conference in Hong Kong. The training featured 12 keynote speeches and 28 seminars on topics such as biblical views on law and government, church-state relationship, and business ethics, presented by 14 instructors, including leading theologians Dr. Wayne Grudem and Dr. Stephen Tong. Chinese leaders traveled from as far as the China-Russia border in northeast China, many risking their own safety to attend; 200 of whom were blocked by the Chinese government from attending. One conference participant explained that they were warned not to go to Hong Kong for the conference but had “counted the cost” and decided to travel to receive the training. Yes, to “count the cost” for your faith—these words seem to be too distant in our daily Christian life in the West, where we are able to practice our faith without facing persecution.

In looking at the lives of Stephen, from the book of Acts, to Justin Martyr, from Watchman Nee to Wang Mingdao, from the murdered Coptics in Egypt to the enslaved Nigerian schoolgirls, and from Pastor Huang Yizi to attorney Gao Zhisheng, one can see they have all “counted the cost.”

My spiritual hero, Dietrich Bonhoeffer, in writing the “The Cost of Discipleship,” reminds us about the difference between what he called “cheap” and “costly” grace. He explains “cheap grace is the grace we bestow on ourselves,” while costly grace “is costly because it costs a man his life, and it is grace because it gives a man the only true life.”

Another example of the cost of one’s faith can be found in the case of Huang Qiurui, a house church leader from Panshi Church, who has been arbitrarily imprisoned for over nine months. Huang has been arrested three times in his life and, on one occasion, was tortured and had three of his ribs broken. In a recent letter to his wife and church from prison, he wrote the following: “For decades, this type of persecution has been happening frequently … I know God uses suffering to test me, shape me, and mold me into a vessel for good. In the midst of my suffering, I am learning many lessons, which I will share when I am released.”

I hope we all will meditate on this message of true discipleship and the cost of faith during this Easter season.

Thank you for your continuous prayers and faithful support.

More than 500 Christians from Wenzhou and surrounding areas in Zhejiang gathered outside the Pingyang County People’s Court in Wenzhou on March 24 during the trial of first instance for Pastor Huang Yizi who has been charged with “gathering a crowd to disturb public order” following his detainment on August 2.

Huang, a pastor at the Fengwo Church in Pingyang County, was taken into police custody 10 days after he and other Christians visited the Shuitou Township Government to protest the intended removal of the cross of the Salvation Church in Shuitou. On July 21, 2014, more than 600 government officials surrounded Salvation Church with the intention of removing the church’s cross; however, Christians formed a human wall around the church to protect the cross. When officials tried to break the human barricade, a conflict broke out, resulting in more than 50 injured church members, with 14 requiring medical attention. Huang was initially charged with “gathering a crowd to assault a state agency.”

“China Aid condemns this latest case of religious persecution against an innocent pastor,” China Aid founder and President Bob Fu said. “Through arbitrary arrest, baseless prosecution and illegal procedures throughout the trial, this case shows once again the worsening situation of religious freedom and rule of law in China. We call upon China’s higher authorities to overturn this unjust decision and free Pastor Huang immediately.”

“Huang Yizi was sentenced to one year in prison,” the pastor’s lawyer, Zhang Kai, said. “We will appeal this sentence; the entire trial violated procedures. Outside the court, there were almost 1,000 people, but the trial was conducted in a small court that could only seat 40 people. The court issued six visitor passes to the client, which violates the basic legal principle that the trial should be open to the public. During the trial, police conducted investigations outside the court, which also violates the law. The judge refused to accept the evidence the defense presented; other times, he wouldn’t even allow us to present specific evidence. We provided video footage from the incident on July 21, 2014, but the judge refused to allow us to play the video.”

Please note that the reported statistics and information on instances of persecution in China reflects data received by China Aid in 2014. Though not comprehensive, these cases cover a wide-range of provinces and municipalities, are diverse in nature, and represent a variety of Christian backgrounds. Thus, this report reflects the status quo of religious freedom for Christians, rule of law, and human rights in China and the severity of persecution faced by Chinese citizens. 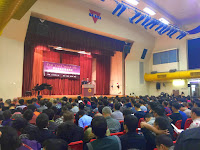 A training conference was held in Hong Kong on March 6-9, entitled the Three-Fold Vision Conference, at which more than 1,800 Christian leaders from Hong Kong, China and Taiwan attended.

The conference included 28 individual training workshops on topics such as Church-State Relationship in a Practical and Global Context, Theological issues of the Chinese House Church, Biblical View of Law and Government, and Christian Leadership, among other topics.

Training conferences such as this encourage leaders in China to know and practice their right to religious freedom and deepen their understanding of Christian worldview.