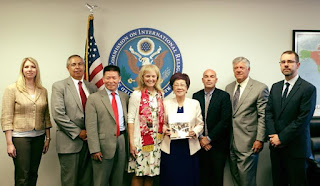 (Washington, D.C.—July 1, 2015) China Aid hosted Taiwan’s former vice-president and current NGO leader Annette Lu during a visit to Washington, DC in late June to discuss the strategic importance of advancing religious freedom in the Asia Pacific region. During her visit, Madame Lu met with Members of Congress, and think tank and NGO leaders to build support for mechanisms to support human rights, religious freedom, and democracy in the Asia Pacific, including the Asia Pacific Religious Freedom Forum scheduled for early 2016.

Lu has been a lifelong advocate of human rights, religious freedom and democracy, and was herself imprisoned for over 6 years after giving a speech to commemorate Human Rights Day, in which Amnesty International subsequently deemed her a prisoner of conscience. Lu described her experiences as a human rights and democracy advocate at a briefing at Amnesty International, and with senior leaders from the McCain Institute, Freedom House, the Heritage Foundation, and with participants of the International Religious Freedom Roundtable.