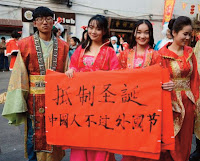 Although the year 2014 will surely be remembered as one of the worst years for human rights and religious freedom in China, we should not be discouraged.


To be sure, the number of Chinese citizens detained and arrested in 2014 is comparatively more than in the past decade combined. Unfortunately, these citizens were denied freedom for simply exercising their basic civil and human rights. By the end of 2014, more than 425 crosses had been forcibly removed and dozens of churches had been demolished in Zhejiang province, and it appears that this targeted campaign against the church is spreading to other provinces in China as well.

During the “Cultural Revolution” (1966-1976), in order to destroy perceived enemies of the state, Chairman Mao and his wife, Jiang Qing, selected five political identities to persecute known as the “Five Black Categories,” which included landlords, rich farmers, anti-revolutionaries, bad-influencers, and right-wingers. As a result, millions were murdered for being on that list.

Since 2012, Christian house church members have been listed in the CCP-sanctioned newspaper the China Daily (July 31) as No. 2 in the “New Black Categories,” along with “human rights lawyers, dissidents, Internet leaders, and disadvantaged social groups.” In December 2014, both the CCP’s military newspaper People Liberation Army Daily and the newspaper Global Times attacked a popular Chinese actor and Christian, Sun Haiying, labeling him as “the third weapon” of “disseminating American political ideas and values in the cloak of Christianity to topple China.” Sadly, the other two weapons to “topple China” are “universal values and constitutionalism.”

Mr.Wang Zuo’an, the head of China’s State Administration for Religious Affairs (SARA) delivered a speech during a visit to two churches in Beijing before Christmas in 2014. In the speech, he warned religious personnel to ensure that “the content of Christianity is consistent with socialist core values as well as to resist the infiltrative activities of outside Christian forces.”

To enforce its negative view of Christianity, several Chinese universities in northwest and south China held anti-Christmas pageants on Christmas Eve, during which students were forced to endure three hours of propaganda videos. University professors were seen standing outside classrooms to ensure no students attempted to leave and attend “illegal” Christmas celebrations. In the eastern coastal city ofWenzhou, Zhejiang, governmental education department officials issued a decree strictly “banning the celebration of Christmas-themed events at schools.”

Is there a national campaign in China being launched against the church in the name of a “war against liberal democracy”? Unfortunately, it appears so. Undoubtedly, these “anti-western value” events would not occur without the Chinese government’s direct support or permission.

Does this mean that Christianity will soon be on the decline in China?Absolutely not. In fact, it has been projected that by 2030, the number of Christians in China will inevitably reach more than 220 million, which will make China largest Christian nation in the world. To be sure, Chinese Christians are not the enemy of the state nor do they threaten traditional Chinese culture or social stability. In fact, a widely used phrase in China is “one more Christian, one less criminal; one more church, one less prison.”

China Aid will continue to fight for the freedom of the persecuted church in China. So, let’s prepare ourselves with a renewed commitment to walk with the persecuted and pray for their freedom.


In 2014, Chinese authorities in charge of religious affairs persecuted the Christian population in China in order to “sinicize Christianity.” In addition to house churches, which typically face persecution, government-sanctioned churches were also targeted, experiencing cross removals and building demolitions. The persecution against Christianity seemed to aim to eliminate the social influence of the Christian community and to correct and transform Christianity to fit the “Chinese Dream.” During 2014, cases in which the Chinese Communist regime persecuted Christians came out in rapid succession with each case worse than the previous one. The restrictions on religious freedom for Christians in these cases were vicious in most instances and had a very bad impact on Christian communities.As a result, these cases have drawn extensive attention and condemnation from the international community.Among persecution cases in China, the five of the top 10 that China Aid highlighted in 2014 are as follows:


On April 28, 2014, more than 1,000 armed police officers and government-hired thugs forcibly demolished Sanjiang Church inWenzhou, Zhejiang. This attack, which is perhaps the most ruthless, was part of a province-wide campaign to remove crosses and demolish church buildings that began in early 2014.According to the most recent statistics published on Dec. 12, 2014, more than 425 churches in Zhejiang have been targeted by the campaign; however, that number is speculated to be much higher due to the probability of unreported attacks. External estimates claim that as many as one-quarter of Zhejiang churches had the crosses removed in 2014. Two days after the demolition of Sanjiang Church, which cost believers more than 30 million Yuan (U.S. $4.8 million) and accommodated several thousand believers, pastors from American and Chinese churches, a China Aid representative, representatives from the Overseas Pastors of House Churches of China organization, and local Christians presented a letter to officials at the Chinese Consulate in Los Angeles that condemned the demolition.


InWenzhou, Zhejiang, more than 600 uniformed government-hired individuals in fire trucks, ambulances and other vehicles stormed Pingyang County’s Salvation Church during the early morning of July 21, 2014, severely injuring 14 church members who were guarding the church. During the resulting confrontation, Christians were beaten with clubs. Many church members called emergency phone numbers, seeking police assistance, but local police refused to send officers to the scene. The government employees were unsuccessful in their attempt to remove the cross; however, they returned on Aug. 14, 2014, and succeeded in their task.

Several Salvation Church members, including one of the church’s pastors HuangYizi, were detained during the series of persecution against the church. Human rights lawyers are currently organizing the defense for Huang.


In addition to the demolition of Sanjiang Church’s building and Salvation Church’s cross, more than 425 other churches in Zhejiang were targeted by the provincial government’s “Three Rectifications and One Demolition” campaign. Some say that this bout of persecution against house churches and the province’s smaller Three-Self Patriotic Movement churches constitutes the most serious persecution of churches since the Cultural Revolution of the 1960-70s. According to internal government documents uncovered by China Aid, the purpose of the campaign is to “correct the phenomena that religion has grown too fast.” The campaign has caused a large number of violent conflicts, leaving many worshippers injured. For example, on July 28, 2014, Wenzhou authorities removed Huaien Hall’s cross. More than 200 police officers and demolition experts arrived at the church around 3 a.m. with cranes, fire trucks and ambulances, overpowering the more than 200 worshippers who guarded the church. Officials succeeded in demolishing the cross.

On July 4, 2014, Pastor Zhang Shaojie of the Nanle County Christian Church in Puyang, Henan, was sentenced to 12 years in prison for “gathering a crowd to obstruct public order” and a false fraud charge. Pastor Zhang was detained in November 2013 along with more than 20 other church members as the local government sought to end its dispute with the church over a portion of land promised to Nanle County Christian Church by the county’s previous government leaders.

The Nanle Church has been continuously persecuted since November 2013.While most of the detained believers have been released, Li Cairen, the woman who officials claim is the victim of Zhang’s fraud, has been missing in police custody since Dec. 21, 2013, when she visited Pastor Zhang’s family. Other church members, including the pastor’s younger daughter, Zhang “Shanshan” Lingxin, have been detained in black jails for short periods.

When human rights lawyers formed a delegation to defend the Christians, they also faced opposition in the form of intimidation, including threats of having their law licenses revoked and beatings. In the meantime, the government began trying to prevent worshippers from gathering at the church by repeatedly claiming it was condemned. Finally, on Dec. 18, 2014, the local government succeeded in their mission to shutdown the church and removed the cross affixed to the main hall.Around the same time, the government unjustly withdrew around 4 millionYuan (U.S. $643,000) from the church’s bank account.

With China Aid’s help, Pastor Zhang’s older daughter, Huixin “Esther” Zhang, escaped from China in July 2014 with her husband and their young daughter. Pastor Zhang’s lawyers are currently petitioning authorities to get his sentence overturned.

On Feb. 18, 2014, Liuzhou Domestic Security Protection Squad agents placed two women from the Hualin Foreign Language Experimental Kindergerten in Guangxi under criminal detention for “illegal business operations.” Authorities claimed that a textbook that teaches character cultivation, which was compiled by the kindergarten’s founding church, the Guangzhou-based Liangren Church, qualified as part of illegal business operations because it was self-published. Days later, lawyers for Cheng Jie, the kindergarten’s director, and Mo Xiliu, a teacher also in charge of logistics, determined that the charges were baseless as no profit was being made from the books nor where they available for use outside the school. Mo was later released on bail.

Late at night on June 23, officers from Guangxi’s Liuzhou Domestic Security Protection Squad arrived in Guangzhou and forced their way into the home of Liangren Church member Li Jiatao, who was home alone with her two young children. Officers detained Li, whose husband, Liangren Church missionary Ma Jiawen, was in Hong Kong. The same night, officers also detained church elder Huang Quirui and Fang Bin, a local who had helped the church print the textbooks. The three were also charged with “illegal business operations.”

The procuratorate filed the case against Cheng, Li, Huang and Fang on Nov. 9, 2014, and the trial was slated to begin in December 2014. The court alleges that the latter three defendants played a role in printing the books and selling and distributing them to other schools. However, lawyers for the group contend that while a small fee was charged to students to cover the costs of printing the books, no profit was made from the distribution of the books nor were the books ever used outside of Hualin Kindergarten.

To read the remaining five cases from China Aid’s Top 10 Persecution Cases in China in 2014, please refer to the story of the same name on ChinaAid.org.

ChinaAid’s President Bob Fu and Vice President Kody Kness traveled to Dallas in mid-January to visit the George W. Bush Presidential Institute on the campus of Southern Methodist University (SMU) and brief its staff on the status of religious freedom and rule of law in China.While on the SMU campus, Fu was also invited to speak as a guest lecturer at the Perkins School of Theology and taught on the status of freedom of religion in China.

In the one hour conversation at the Bush Institute, hosted by Amanda Schnetzer, Director for Human Freedom, Fu described the situation for religious practitioners and Chinese citizens who endeavor at their peril to advocate for basic human rights in China. Fu described, in detail, his own experiences in China advocating for religious freedom and leading a house church and his subsequent imprisonment, harrowing flee from Chinese authorities, and eventual escape to the United States. The conversation then turned to the growth of Christianity in China and the nexus between religious freedom and economic growth and social stability.

The Bush Institute’s Human Freedom programs “spotlight freedom advocates and support democratic movements.” Fu is featured in the Bush Institute’s “Freedom Collection,” which highlights the stories of those who have “stood for freedom around the world.”

At SMU’s Perkins School of Theology, Fu lectured on the growth of Christianity in China, highlighting the distinction between the house church movement and the government-sanctioned Three-self Patriotic Movement church in China and the ongoing persecution of both by the Chinese government.

China Aid will continue to build partnerships with universities and organizations such as SMU and the Bush Institute to promote religious freedom and the rule of law in China.