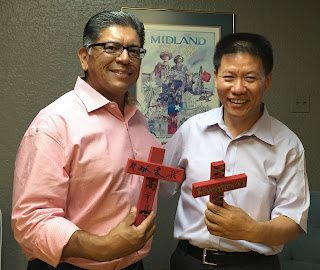 (Midland, Texas—Aug. 17, 2015) In solidarity with Chinese Christians protesting the forced removal of church crosses, China Aid used Rock the Desert (RTD), an annual Christian music festival in Midland, Texas, that took place on Aug. 6-8, as a platform to launch their Chinese cross campaign.

As part of the campaign, RTD attendees decorated a red cross and posted a photo of it on Facebook or Instagram, using #RocktheCrossChina. Participants were invited to keep the crosses as a reminder to pray for Chinese Christians.

The campaign is a way to show support for persecuted churches and Christians, especially in China’s coastal Zhejiang province where a cross demolition campaign has affected an estimated 1,500 churches. As the government continues to tear down crosses, Chinese Christians have begun manufacturing their own red crosses in protest and as a symbol of their unshakable faith.

Hundreds of people participated the launch of China Aid’s Chinese cross campaign, including Midland mayor Jerry Morales. Many participants enthusiastically told other festival attendees about the campaign and returned with friends and relatives who also wanted to decorate a cross.

The red crosses are very characteristic of crosses topping Chinese church, which are large, red and typically framed in neon lights in order to attract attention.

In addition to demolishing crosses, which is a government response to the rapid spread of Christianity, Chinese authorities illegally detain, incarcerate, and violently beat people who oppose the demolitions.