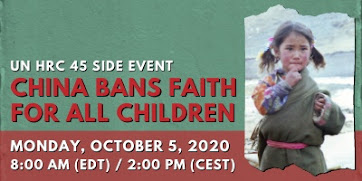 China Bans Faith for All Children

(World Wide Web—Oct. 3, 2020) On October 5, Bob Fu, Founder and President of China Aid will speak at the upcoming UN HRC Side Event advocating for children in China to have the freedom to profess their faith.

This informative event will highlight how China, through its current actions, breaches the Convention on the Rights of the Child, specifically Articles 14 and 29. The convention will also:
In addition to Bob Fu as a keynote speaker, the rally for freedom of children’s faith includes Emilie Kao, Esq., Heritage Foundation,  an attorney who has defended religious freedom for the last 14 years. She has worked on behalf of victims of religious freedom violations in East Asia, the Middle East, Europe and South Asia at the State Department’s Office of International Religious Freedom and Becket Law. Kao previously worked at the United Nations,,,,