(Beijing—Jan. 29, 2012) China has barred the daughter of human rights lawyer Ni Yulan from leaving the country to accept on her mother’s behalf the Dutch government’s 2011 Human Rights Defenders Tulip award at Tuesday’s ceremony, ChinaAid has learned. 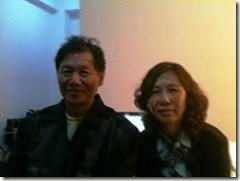 ChinaAid is deeply troubled by the Chinese government’s action to prevent the daughter of imprisoned Christian lawyer Ni from attending the Tuesday award ceremony at The Hague. The ceremony, normally held on International Human Rights Day on Dec. 10., was delayed because of the request of Ni’s family to delay the announcement of her selection as the 2011 award winner. The family was concerned that her selection would detrimentally affect her criminal case. Ni was formally arrested last May and charged with “creating a disturbance.”

(Photo shows Ni and her husband, who has also been taken into custody.)

ChinaAid condemns the Chinese government for its disregard of international practice in depriving Ni’s daughter of her right as a citizen to travel abroad.

ChinaAid, which along with the British group Christian Solidarity Worldwide nominated Ni for the award, was also invited to attend the award ceremony. However, ChinaAid president and founder Bob Fu will be unable to attend due to a scheduling conflict and has asked Edwin Baelde, chairman of one of ChinaAid’s partner agencies, the Dutch non-governmental human rights and religious freedom group SDOK, to represent him.

ChinaAid and Christian Solidarity Worldwide began the preparatory work for Ni’s nomination for the 2011 award last May and formally submitted her nomination in September. In November, when the independent judging panel selected Ni, it contacted her family and lawyers with ChinaAid’s assistance, so that they would hear the news first and directly from the judges.

ChinaAid reiterates its call for the the Chinese government to immediately release Ni and her husband and to allow their daughter to accept the award on her mother’s behalf at The Hague.

See these earlier reports on Ni’s award and criminal case: