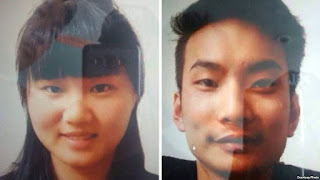 (Beijing—June 28, 2017) ISIS’s murder of two Chinese missionaries sparked public outrage as China’s government failed to adequately investigate their deaths, instead terming their mission work “illegal,” blaming the Koreans with whom they were affiliated, and seizing those who attempted to spread the news.

On June 8, ISIS claimed responsibility for the kidnapping and deaths of 26 year-old Meng Lisi and 24 year-old Li Xinheng, two Chinese nationals serving as missionaries in Balochistan, Pakistan. Meng and Li had been in terrorist custody since they disappeared on May 24, but the Chinese government did not make any effort to rescue them, leaving the work to Pakistani officials.

“Americans make every endeavor and spend a large sum of money to retrieve the remains of the veterans of the Korean War and the Vietnam War at all cost,” U.S.-based Christian Zheng Leguo said. “Even those who lost consciousness were rescued. The dead were buried properly. The cruel and unreasonable Chinese Communist government, in contrast, abandoned two Chinese preachers, Li Xinheng and Meng Lisi. After ISIS kidnapped them, the Chinese government did not make any effort to rescue the two Chinese citizens and left all the work to the Pakistani government. The Pakistani military, on the other hand, cared more about bombing the terrorists’ base of than helping the two hostages.”

The Global Times, a state-run newspaper, fueled the initial uproar surrounding the murders by attempting to pin guilt on the Korean Christians with whom Meng and Li were associated, saying that they encouraged the victims to conduct missionary work, In response, Chinese internet users questioned whether or not the state was trying to redirect condemnation from the terrorist group to the victims and Korean missionaries.

Unsatisfied, many Chinese Christians closely followed the case and spoke out against the handling of the case. Two Chinese pastors, one located in Shandong and another located in the San Francisco Bay Area, both told ChinaAid that four Christians had been detained in the wake of the deaths, and the government is pressuring church members to keep silent.

The day after the Islamic State announced their deaths, the Chinese government held a press conference in which Hua Chunyong, spokesman for the Ministry of Foreign Affairs, said that the incident would not interrupt the One Belt and One Road initiative—a proposal Chinese president Xi Jinping launched in 2013 to reinvent the Silk Road by connecting Central Asia, West Asia, Southeast Asia, and China.

ChinaAid exposes abuses, such as China’s blame of Meng and Li as victims and their failure to take proper measures to rescue them, in order to condemn the persecution of Christians and promote religious freedom, human rights, and rule of law.