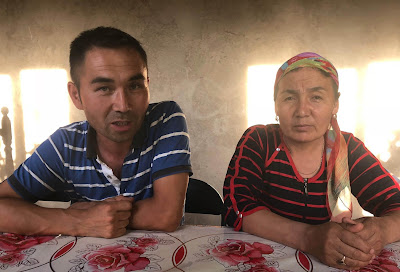 The Chinese government has forbidden relatives of imprisoned Kazakh citizens who traveled to Kazakhstan to visit them in “re-education camps.” A woman named Ainor has stated that her son was illegally imprisoned for a crime he did not commit. Commenting on the state of her son, Arxin, Ainor stated: “My son, who was plump before being arrested, pined away in the prison.”

There are several stages that measure prisoner progress in the re-education camps. Stage one is the “class under strict management.” Those who pass the first stage advance to the second stage, which is the “class under loose management.” Prisoners are required to recite the Chinese government’s 26 characteristics of illegal religious activities and write tests in Chinese and not in their native tongue. A released prisoner revealed that those who speak their own language will be beaten and locked in a chamber. The prisoners have to write letters guaranteeing their silence upon release, promising never to leak any information about the camp. If they do, their family members will be arrested.

These regulations forbid new couples who have not obtained a marriage certificate to go through the procedures of a Muslim wedding, or nikah, as well as banning the editing, translation, and publication of religious materials. According to local residents, the regulations are unprecedentedly lengthy and detailed.

Bartjiang Timurhan is a Kazakh who lives in the area of Almaty known as Xileke. His father, Tirmurhan, who worked for Tekes County’s bureau of finance, is 82. Following his retirememt, Timurhan occasionally visited his son in Kazakhstan. According to Bartjiang, the financial bureau summoned his father last October, asking senior citizens to immediately return to China. Once Timurhan went back, he could never leave China again. “After he went back, the government took away his Chinese passport and the Kazakhstan green card. His health condition is deteriorating. He does not have a home to go back to. My father asked why he had to submit his passport, and the bureau answered that ‘it’s the order from the superiors.’ After travelling back to China, he went to the hospital three times. Now, my mom and I live in Almaty.”

Bartjiang’s second brother-in-law Gemingnur (51) worked in the Traditional Chinese Medicine Hospital of Tekes County. He moved to Kazakhstan after he retired. Last April, Gemingnur travelled to China to visit relatives, but the police confiscated his passport. Gemingnur’s children implore the Chinese government to release their father and let the family reunite.

Mirjiang Bolatibek’s father (43), another member of the unfortunate family, worked in the Ministry of Education in Fuyun County, Xinjiang. In the beginning of this year, the Fuyun County police sent him to the “re-education center.” Mirjiang revealed: “After my father went back to Xinjiang, the police asked him why he sent his son to Kazakhstan for schooling. He used WhatsApp to contact, and the police used it as an excuse to arrest him. He’s been detained in the political training center for five or six months now. My mother can visit him once a month; the monitored visit is restricted to 10 minutes. They barely have time to greet each other.”

A Kazakh woman named Liza’s father, Bulati Reazdehan, and mother, Hayixiatai Buliezike, are teachers in Habahe County, Xinjiang. Liza revealed that in this May, her parents were sent to the political training center in Habahe County for staying in Kazakhstan for two months. She said: “On May 7, they travelled to Urumqi from Habahe to receive an operation. I was unable to reach them after I video called them through WeChat on May 13. Later, relatives told me that my parents were brought away by the police.”

ChinaAid highlights the abuse suffered by the families mentioned above, as well as others targeted in Xinjiang’s crackdown on ethnic minorities, in order to promote the rule of law, religious freedom, and human rights.