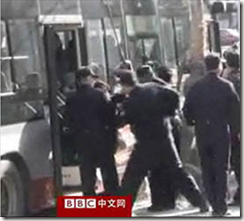 Compass Direct News
Police in Beijing force members of Shouwang Church into a bus on Sunday (April 10) in this photo made from BBC footage.(Photo: BBC)
Police put pastors under house arrest over weekend, before detaining at least 160 on Sunday.
DUBLIN, April 11 (CDN) — Police in China held “about two dozen” pastors and elders of Beijing’s Shouwang Church under house arrest or at police stations over the weekend to keep them from attending a Sunday worship service in a public location, according to Bob Fu of the China Aid Association.

Three top leaders of the church remain in jail and several others are under strict surveillance after  hundreds of Chinese police yesterday cordoned off the walkway to a third-floor outdoor meeting area adjacent to a property purchased by the church in Haidian district, Beijing, and arrested at least 160 members of the 1,000-strong church as they tried to assemble.

The church members were bundled into waiting vans and buses to prevent them from meeting as planned in the public space, Reuters and The Associated Press (AP) reported, and most had been released by today.

Church leaders claimed officials had pressured their landlords, forcing them out of both rented and purchased locations and leaving them no choice but to worship in the open.

“The government cornered them into making this decision,” Fu said, adding that the church had initially tried to register with the government. “They waited for two years, and when the government still denied them registration, they tried to keep a low profile before finally deciding to buy the Daheng New Epoch Technology building.”

Shouwang is a very unique church, he said.

“Most members are well-educated, and they include China’s top religious scholars and even former government officials, which may be a factor in the government’s response to them,” he said.

As one of the largest house churches in Beijing, Shouwang is unique in insisting on meeting together rather than splitting the congregation into smaller groups meeting in several locations, Fu said. Zion church, for example, may have more members than Shouwang, but members meet in smaller groups across the city.

“This is based on the founding fathers’ vision for Shouwang Church to be a ‘city on a hill,’” as stated in the Bible in Matthew chapter five, Fu explained. “So they’ve made a conscious decision not to go back to the small-group model. Either the government gives them the keys to their building or gives them written permission to worship in another location, or they will continue meeting in the open.”

Police arrested anyone who showed up to take part in the service, AP reported.

‘Most Basic Necessity’
Church leaders last week issued a statement to the congregation explaining their decision to meet outdoors.

“It may not be the best decision, but at this time it is an inevitable one,” the statement said, before reminding church members that the landlord of their premises at the time, the Old Story Club restaurant, had come under government pressure and repeatedly asked them to leave, while the previous owners of the Daheng New Epoch Technology building, purchased a year ago by the church for 27.5 million RMB (US$4.2 million), had refused to hand over the keys. (See, “Church in China to Risk Worshiping in Park,” April 7.)

The church had already met outdoors twice in November 2009 before officials gave tacit consent to move to the Old Story Club restaurant. Officials, however, again prevented Shouwang Church from meeting in May and August of last year.

Fu said it was common for government officials across China to pressure landlords into revoking leases for house church groups.

“For example, right now I know of at least two churches that were made ‘homeless’ in Guangzhou this week, including one church with at least 2,000 members,” he said.

Shouwang’s statement pointed to Article 36 of China’s Constitution, which grants every citizen freedom to worship, and the Universal Declaration of Human Rights, ratified by China, which states that every citizen has the right to observe his religion or belief “either alone or in community with others and in public or private.”

For this reason the church planned to meet outdoors until officials granted legal, written permission to worship in an approved location – preferably at the building purchased by the church.

The document also advised church members not to resist if they were held under house arrest or arrested at the Sunday venue.

“Objectively speaking, our outdoor worship must deliver this message to the various departments of our government: attending Sunday worship is the most basic necessity for Christians in their life of faith,” the statement concluded.

The number of Protestant house church Christians in China is estimated at between 45 and 60 million, according to Yu Jianrong, a professor at the Chinese Academy of Social Sciences Rural Development Institute, with a further 18 to 30 million people attending government-approved churches.