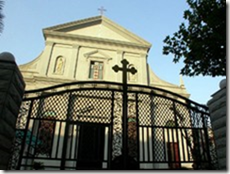 Another illicit China ordination planned
cathnewsindia  Published Date: June 1, 2011
Father Joseph Shen Guo’an is set to be ordained a bishop soon in Wuhan (Hankou) diocese, central Hubei province, despite there being no papal mandate for the move, ucanews.com has learned.
(St. Joseph’s Cathedral of Wuhan (Hankou) diocese, where an illicit ordination will take place)
Church observers warned the authorities should not force an illicit ordination saying that it benefits nobody.
The ordination of Father Shen, 50, is tentatively set for June 9, according to Church sources. They said some diocesan priests who tried to keep up the Church principle are now suffering, as government officials have lobbied their support for the ordination.

Some bishops in neighboring provinces are also “under great pressure,” as officials asked them to ordain Father Shen, the sources continued.
Local Catholics say Father Shen is not a suitable candidate and does not have papal mandate. They say that it is not his will to become a bishop.
Repressive action
A Church observer asked how it is possible that the Chinese authorities could allow such “repressive action” on the Catholic bishops and bishop candidates, especially where the candidate is neither suitable or willing to accept such a position in the Catholic Church?
The personal will of Chinese citizens in choosing their profession or religious beliefs should be respected and never imposed. “Episcopal ordination is strictly a matter for the Catholic Church and not a political issue for any government in the world,” he said.
In that sense, the government’s “self-ordination policy” does not respect the Catholic doctrine but politically interferes in Church matters, inventing another doctrine and changing the strict discipline of the Church. “In the end, we will get in China only a national Church of Beijing but no longer Catholic one,” he warned.
This will be another unilateral and illicit action against Catholic clergy and their leaders that will make more divisions among Catholic communities and provoke more tension in the Chinese society and also at international level, he said.
“Certainly, the reaction of the Holy See to the possible illicit ordination of the Catholic clergy will be according to Church principles, as it was in the past. The main actors in China should be more responsible in the 21st century,” the observer said.
As always, the Holy See trusts all Catholic bishops, priest and laypeople in China and is aware that many of them will try to avoid such illicit events, resisting even heavy external or internal pressure imposed on them unjustly, he said.
A time bomb
Anthony Lam Sui-ki, senior researcher of Hong Kong diocese’s Holy Spirit Study Centre said an illicit ordination not only hurts the Church, but also plants a time bomb in the country.
“All parties will be losers,” he said. The government gains nothing from such a thankless task and the illicit bishop will sit on a volcano and stand accused according to the Church canon.
The faithful will be sad to see their priest betray the Church, setting a bad example and the universal Church will also feel sorrow over the disrespect to the pontiff supremacy, Lam explained.
Father Shen was born in 1961 and ordained a priest in 1988, among the first batch of graduates since the Central and Southern China Theological and Philosophical Seminary in Wuhan opened in 1983. He served as a parish priest in neighboring Puqi diocese for 10 years before returning to Wuhan.
He is vice-chairman of the Provincial Catholic Patriotic Association and was elected the bishop candidate in 2008.
There is currently no bishop in Hubei province, which has nine dioceses and two apostolic prefectures but the “open” Church structure merged them into five dioceses.
Hankou, Hanyang and Wuchang dioceses were combined to become Wuhan diocese in 2000. There are 25 open priests and 40 underground priests, serving a total of 20,000 Catholics in the area.
The last bishop of Wuhan (Hankou) was Bishop Bernardine Dong Guangqing, who was one of the first two Chinese “self-elected and self-ordained” bishops without papal mandate in 1958, a year after the Chinese Catholic Patriotic Association was established.
Automatic excommunication
Before that ordination, several telegrams were sent to the Vatican asking for approval. But the reply of the Holy See was already known to the candidate, bishops, clergy and to the government, as it laid down in the Code of Canon Law, which says that any bishop ordained without papal mandate, or who ordains such a bishop, incurs automatic excommunication, “reserved to the Apostolic See.”
Ever since increased communications between the Church in China and the Holy See became possible in the 1980s, Pope John Paul II recognized Bishop Dong as the bishop of Hankou in 1984. The Franciscan bishop died in 2007.
The upcoming event will be the second illicit bishop’s ordination in six months after the one in Chengde on Nov. 20. The Vatican issued a communiqué condemning that as a grave violation of Catholic discipline.
Source: ucanews.com
http://www.cathnewsindia.com/2011/06/01/another-illicit-china-ordination-planned/ 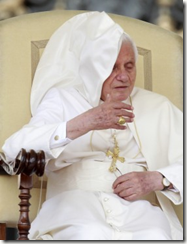 Beijing splits with Vatican on ordination
International Business Times   June 2, 2011 6:53 PM EDT
China’s government-run Catholic Church plans to ordain a new bishop this month, without the Pope’s approval.
(Photo: REUTERS / Tony Gentile) A gust of wind lifts Pope Benedict XVI’s mantle during his weekly general audience at St. Peter’s Square in the Vatican)
Beijing selected Father Joseph Shen Guoan, age 50,  as the bishop of Wuhan, in Hubei province in November of last year. Despite continued pressure from the Vatican, Beijing has announced that it will continue with the ordination.
The news agency called this a “repressive action,” reporting that local Catholics are upset that Shen does not have the papal mandate traditionally necessary for ordination.

Responding to Beijing’s gestures, the Vatican has deemed the ordination “illicit,” and Vatican spokesman Father Federico Lombardi told Catholic News Agency that this represents “a grave violation of freedom of religion and freedom of conscience.”
There are an estimated 13 million Catholics in China, about 5 million of which are official members of the Beijing-sanctioned Chinese Catholic Patriotic Association.
The bishop’s ordination represents a rupture in Beijing’s relationship with the Vatican, which has largely cooled under Pope Benedict, who has been allowed to offer quiet suggestions on appointments in the recent past.