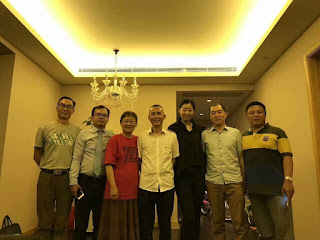 The crackdown, named the 709 Crackdown because it began on July 9, 2015, rounded up hundreds of lawyers nationwide and subjected them to detention, torture, and lengthy prison sentences. All of the lawyers have since been released, except for Wang Quanzhang, who has been missing for almost two years.

Recently, Wen Donghai, a lawyer who represented defendants targeted in the crackdown and several sensitive cases, had his license revoked. He told Radio Free Asia, “As a lawyer, law is everything to me. I will definitely try to protect my rights through legal means. Maybe it won’t make any difference, but I will still go through the entire process and serve as an example. I will tell people: ‘I believe in the law, but it’s questionable whether this country has laws.’”

Similarly, Lawyer Li Heping also lost his license, disallowing him from practicing. Authorities took Li from his home the day after the crackdown began and tortured him while he was in prison. Li stood trial on April 28, 2017, and, after convicting him of “subversion of state power,” authorities released him.

Li’s wife, Wang Qiaoling, penned a letter further describing mistreatment suffered by human rights lawyers. The letter has been translated and printed in full below

ChinaAid exposes abuses, such as those suffered by Wen and Li, in order to stand in solidarity with the persecuted and promote religious freedom, human rights, and rule of law.

I did not want Heping to become a human rights lawyer 10 years ago, because it’s dangerous. Heping was arrested during the 709 Crackdown. I tried to persuade him that he should give up being a lawyer after being released; instead, I would take over his work. He was imprisoned for 22 months. During the night of his release, I told him what I was thinking. He laughed heartily: “It’s impossible that you can take over!” Now, Li Heping’s license has been formally revoked. I don’t have a chance of operating as a lawyer. The only thing left for me to do is to cultivate my children to become lawyers.

Yang Jinzhu, a representative lawyer for those in the 709 Crackdown, had his license revoked by the Hunan Justice Bureau, accusing him of “interfering with the investigation by attacking and slandering the judicial organs and the legal system.” He was desperate and furious about the Chinese legal system because he saw through how the Chinese government monopolized the power, loss of independence, and fairness of the judiciary.

Since the 19th National Congress of the Communist Party of China last September, 17 human rights lawyers from three law firms in nine provinces were banned by the government. Xie Yanyi, Huang Simin, Qin Yongpei and a number of other lawyers received notices from the justice bureau revoking their license. The Nanming Justice Bureau forcibly dismissed the “Baijuming Law Firm” of Guangxi.

Before, the government punished Zhu Shengwu from Shandong and Wu Youshui from Zhejiang for criticizing the Communist Party and the judicial system and retaliated against Peng Yonghe, Wang Longde, and Wang Liqian for withdrawing from the Bar Association.

The government arrested Lawyer Yu Wensheng from Beijing, who lost his license at the beginning of this year for “inciting subversion of state power” and “interrupting public affairs.” The government forbade the lawyer hired by the family members to meet with Yu Wensheng after he was arrested in January.

The incessant persecution of human rights lawyers violates the standards of justice. The government attempts to eliminate the awareness of civil rights and the rule of law, which is in accordance with the ideology of “stability maintenance” and the restoration of totalitarianism.