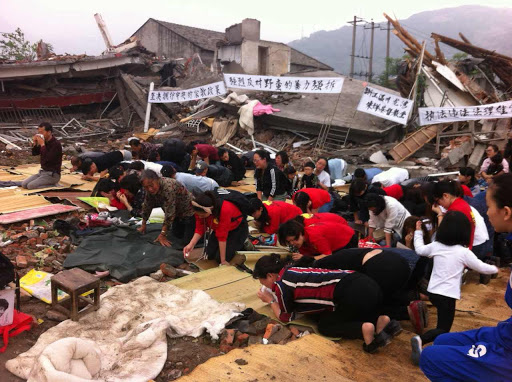 (Beijing—Jan. 30, 2020) The Chinese government will roll out new regulations on religion Saturday.

However, Xi’s approach became a significant turning point. Authorities launched a five-year plan for reworking religion so that the Communist Party sits at its dictatorial head. Under this, officials throughout China have asked churches to fly the national flag while destroying religious imagery, such as crosses, or church buildings. In churches run by the state, Christians are commanded to sing patriotic songs and listen to pro-Communist Party sermons.

Churches or Christians deemed not in compliance with any of the official’s requests can be subjected to a variety of measures, including closure or arrest.

The new rules will extend the Chinese leadership’s leash to carry out acts against Christians. Article 5 of the new regulations states, “religious organizations must adhere to the leadership of the Chinese Communist Party, observe the constitution, laws, regulations, ordinances and policies, adhere to the principle of independence and self-government, adhere to the directives on religions in China, implementing the values ​​of socialism.…”

Any religious person or institution deemed in violation of any of these aspects will face legal consequences. Often, China will use religious practices typical to the faith, including collecting offerings, to charge someone with a crime. Since the Chinese Constitution guarantees religious freedom for all in Article 36, they are violating the very law by which they encourage Christians to abide.

“The new rules codify the Chinese Communist Party’s ideological and leadership supremacy over all religious affairs in China,” said ChinaAid President and Founder Dr. Bob Fu. “From now on, the Chinese Communist Party will become the head of the churches, temples, mosques, and other religious institutions. They will dominate every sphere of religion, from religious doctrines, leadership selection, financial management, and foreign exchanges. There will be little autonomy and independence left for any religious organizations in China. No independent religious institutions, such as house churches, will be legally allowed or tolerated or allowed to exist unless they join the state-run church organizations.”