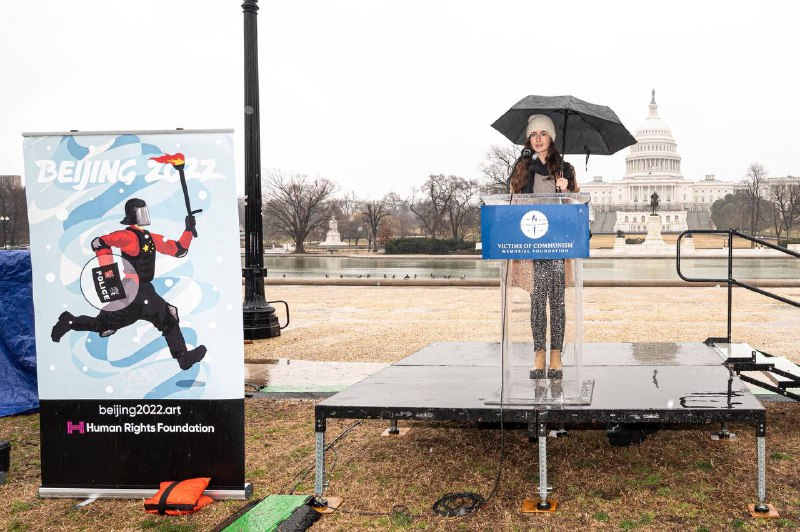 ChinaAid at the #NoBeijing2022 Rally in Washington DC

Today, in one of the world’s most influential nations, millions of people face an oppressive government. The Chinese government, while growing in economic and global power, has been testing the waters in how far it can go with committing gross human rights abuses.

This system is being upheld and reinforced by corporate greed and money under the Olympic banner. US companies are equally profiting off a system built to crush religious minority groups from Tibetan Buddhists, Uyghur Muslims, Falon Gong practitioners, and house church Christians.

Just yesterday, Pew released a report on the world’s perception of China. When asked what comes to mind when they think of China, Americans brought up human rights in 20% of responses in the open-ended survey questions. A number I am sure many of the advocates here are a bit disappointed is not higher.

What companies need to be taking note of is that 70% of Americans would prioritize human rights in China even if it harmed the economic relations between the two countries.

The State Department has designated China as a Country of Particular Concern since 1999. China has since hosted two Olympic games covered by NBC. The Chinese Communist Party has not been operating in secret. NBC, Coca-Cola, Visa, and Airbnb know and are turning a blind eye.

When we hear that there are more than a million people are arbitrarily detained by government authorities and subjected to abuse in East Turkestan. I hope one remembers that these are people. These people have families and dreams. These people also have rights. Rights guaranteed by the Chinese Constitution that are not being respected, and rights put forth by the United Nations and other international governing bodies, which China has signed but utterly fails to implement.

It is most important to keep the names of prisoners of conscience at the forefront of media in the coming weeks. China wants them to be forgotten in the medal counts and the recap videos to come. We must continue to pressure the companies to publicly condemn the repression Chinese authorities have carried out in those regions at the bare minimum.

Just last month as athletes were traveling to China from around the world, China arrested and charged activist Guo Feixiong with “subversion of state power” for attempting to travel to the US to visit his dying wife.

While the athletes compete this next month, Gao Zhisheng, an attorney renowned in China for his fearless defense of rights despite experiencing multiple imprisonments, kidnappings, and torture, will get closer to the fifth anniversary of his last forced disappearance.

Journalist Zhang Zhan’s health will continue to deteriorate in a Chinese prison during the opening ceremony tomorrow.

More must be done. Our work is not done once the games begin.

The Beijing Olympics started today and will continue until February 20. Several countries refused to attend the opening ceremony amid President Biden’s diplomatic boycott. However, ABC News reported that Taiwan reversed its initial decision of boycotting the opening ceremony. India, on the other hand, has decided not to attend.

Reports from the Wall Street Journal indicated that some teams might not attend the opening ceremony in protest.

ChinaAid also recently signed onto a joint statement with Human Rights Watch and 240 other organizations calling for action against the Winter Games and warning athletes of the surveilling nature of the host country.