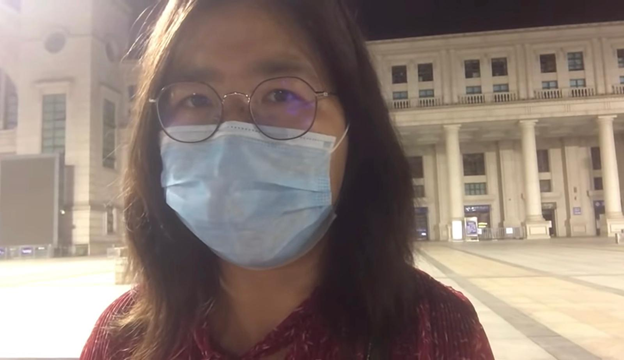 On May 13, 2020, Zhang Zhan spoke about the Coronavirus at Wuhan Hankou Railway Station.
(Photo: ChinaAid resource)

(ChinaAid, Midland, TX—May 16, 2021) On May 14, the eve of imprisoned, courageous Chinese citizen journalist, Lawyer Zhang Zhan’s one year anniversary of her arrest for whistleblowing about the Wuhan Virus, ChinaAid awarded her the “2020 Lin Zhao Freedom Award.”* Based on the nominations received, ChinaAid‘s Selection Committee unanimously voted to honor Ms. Zhang, a Christian, a lawyer, and a fearless, citizen journalist.

During the time the novel coronavirus (COVID-19) raged throughout the world, igniting and spreading fear of its deadly, debilitating effects, Lawyer Zhang travelled to Wuhan, the center of the outbreak. She courageously investigated the area, including the Wuhan Institute of Virology, to film what she witnessed. For her work revealing unsettling findings to the world, Chinese Communist Party (CCP) authorities arrested Madam Zhang, unjustly tried her, and then sentenced her to serve four years in prison. By courageously exposing what she witnessed and learned, however, Zhang Zhan demonstrated a dedication to the victims of the Covid-19 that touched the world, and a spirit of fearless sacrifice against the Chinese Communist regime.

As the year, 2018 marked the 50th anniversary of Lin Zhao’s death, ChinaAid Association inaugurated the “Lin Zhao Freedom Award” to commemorate Lin Zhao and pass down her legacy to following generations. The award recognizes domestic Chinese citizens who are committed to promoting contemporary Chinese civil society and to progressing rule of law. The “Lin Zhao Freedom Award” aims at commemorating Lin Zhao’s democratic vision and ethics and courage, as well as her insistence to non-violence. It also provides moral and financial support to individuals who have sacrificed enormously in order to promote contemporary, Chinese civil society and progress rule of law.

The Chinese Communist authorities’ arbitrary arrest, torture, and shameful trial [Lin Zhao style] to Christian citizen journalist, Lawyer Zhang Zhan and the heavy, heartlessly four-year prison sentence portray an extension of the CCP authorities’ year-long ongoing cover-up of the Wuhan viral COVID-19 crime. Like whistleblower Dr. Li Wenliang, Madam Zhang is not only innocent of the CCP’s fabricated charges, but she is also a heroine to the world for her selfless and courageous efforts to expose the truth about the Wuhan Virus.

Potential recipients include democracy activists and rule of law advocates experiencing severe persecution, such as being imprisoned, or placed under surveillance or house arrest.

*”The Lin Zhao Freedom Award” honors one person each year with a certificate recognizing their work, and a proposed prize of RMB 25,000 [3,884 USD. If the designated, chosen recipient cannot receive the prize in person, ChinaAid will present the prize to his or her family. If the recipient or his/her family does not wish to be named for security reasons, ChinaAid will present the award anonymously and make an announcement accordingly.

ChinaAid will maintain results of all awards as historical information/record that will be made public at the appropriate time, either with the consent of the living recipient, or after the recipient has passed away. China Aid Association has set up a selection committee for the Lin Zhao Freedom Award, consisting of five outstanding experts and lawyers on human rights in China, including two representatives of China Aid, and three non-China Aid Association judges. Chinaid’s Selection Committee reviews nominations and determines the final award by majority vote.

During the process of exposing the truth regarding the Wuhan Virus, Zhang Zhan conveyed compassion, care, and loving concern for
victims of the coronavirus which continues to touch the world. ChinaAid proudly honors Madam Zhang Zhan for not only her courage, but also for her fearlessness, and willingness to sacrifice herself while confronting the CCP tyrant. We are thankful for her being strong… for being of good courage… for not being afraid of them….