(Ridderkerk, The Netherlands – Dec. 2, 2011) Through presentations at a human rights forum and media interviews, a ChinaAid delegation was able on Thursday to draw nationwide attention in The Netherlands to the growing problem of the persecution of the church in China. 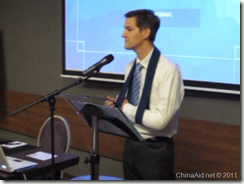 ChinaAid founder and president Bob Fu was one of four speakers from ChinaAid at an afternoon forum on “The Situation of Christians in China” in Ridderkerk, the Netherlands.  The ChinaAid delegation had just spoken at a seminar on Wednesday at the European Parliament.

The Thursday event in The Netherlands was attended by about 50 people from more than 30 NGOs, media organizations and the European Parliament.

(Photo: Edwin Baelde of the Stichting de Ondergrondse Kerk [SDOK, the Association of the Underground Church] opens the forum.)


After a welcome by Edwin Baelde of the Stichting de Ondergrondse Kerk (SDOK, the Association of the Underground Church), the Dutch branch of the worldwide mission organization International Christian Association, Fu (photo below) reported on the overall human rights situation in China over the past 11 months, including detailed facts and figures based on ChinaAid’s research about Christian persecution. 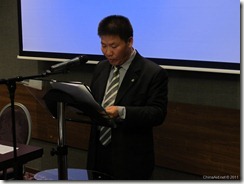 Pastor “John” used compelling statistics to warn foreigners not to be easily fooled on the issue of religious freedom in China by scenes of overflowing turnout at the government-run Three-Self churches.  He pointed out that in 1949, when Beijing’s population was 2 million, there were 200 churches in the capital.  But now, Beijing’s population is 18 million, yet there are only 18 churches, or an average of one church for every 1 million persons.  This is a disturbing reality and speaks volumes about the so-called “religious freedom” that Chinese citizens can enjoy. 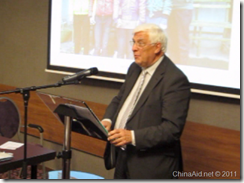 Finally, Dr. Bastiaan Belder (photo at right)closed the forum by thanking ChinaAid for its accurate and reliable reporting and its penetrating analysis.  He jokingly said that whenever he has to make a report to the European Union on the subject of human rights in China, he just goes to the ChinaAid website to take excerpts from its reports and use its statistics.  He closed by saying that he was fully committed to supporting China’s persecuted church, and would redouble his efforts through the EU and the Dutch government to do more.

After the forum, representatives of the NGOs who attended the event said the reports had opened their eyes and thanked the speakers, and national and local Dutch television interviewed the ChinaAid delegation.

The full text of Pastor Bob Fu’s report is below. Click here for the PDF of the report.


Christian Persecution in China in 2011:
A Brief Report
——“In the midst of storms, the church grows”
Testimony of Pastor Bob Fu
China Aid Association
Human Rights Forum
on
The Situation of Christians in China
Ridderkerk, The Netherlands
December 1, 2011