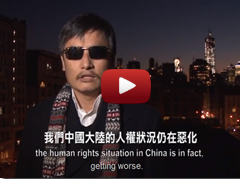 (New York–Dec. 2, 2012) Blind Chinese legal activist Chen Guangcheng, in a videotaped address to mark Human Rights Day, warns China’s new leader Xi Jinping that whether the nation goes through a peaceful or violent transition depends on whether he starts taking steps to defend human rights and uphold the rule of law.

(Please click on the picture to watch the video.)

Chen, whose dramatic escape from long-term illegal house arrest in China in the spring captivated the world, also decried the lack of action among leaders of the free world in the face of China’s ongoing human rights violations, which have seriously escalated under the leadership of outgoing president and former Communist Party chief Hu Jintao.

Addressing Xi by name, Chen said, “The whole nation is watching you. Whether you follow the mandate of heaven and the will of the people and carry out reform or you hijack the government and protect the privileged [i.e. those in power] foretells whether our motherland will go through a peaceful or a violent transition.”

Recorded in advance of the U.N.-designated Human Right Day on Dec. 10, Chen closed his nearly 10-minute address by speaking to his compatriots and urging them to take the initiative to defend their own rights.

“People back home should realize that we must be united. Our rights are our own to fight for and obtain,” he said, later adding that “the principle of human rights can only be upheld through real actions.  It most certainly is not a matter of just paying lip service.”

Chen said that a long-lasting social system that is fair and reasonable can be established only through action.  “Do not expect an enlightened ruler to take the initiative and bestow it; do not hope for upright officials to defend your rights for you,” he said.  “Our fate is actually in our own hands.”

Making his remarks against a backdrop of the New York City skyline, Chen recalled the many victims of the Communist regime that he left behind, beginning with his immediate family.

The government’s “acts of revenge against my nephew Chen Kegui and other friends and family are still going on.  Chen Kegui, who tried to defend our family and was acting in self-defense, is still in jail,” Chen noted.  Chen Kegui was sentenced last week to a 39-month jail term for wounding at least one policeman when police burst into his home in a night-time raid searching for Chen Guangcheng.

In the videotape, Chen listed by name a wide-ranging selection of victims of Chinese government human rights abuses, from the Uyghur Christian leader Alimujiang to a series of human rights lawyers to imprisoned or “disappeared” rights activists including Nobel Peace Prize winner Liu Xiaobo and Gao Zhisheng.  He also referred to victims of China’s one-child policy, of the crackdown on Falun Gong practitioners and of the oppression of the Tibetans.

“Can the international community continue to turn a blind eye to the intractable forces of the ruling Chinese Communist Party protecting its autocratic rule and unhesitatingly inflicting on the people all sorts of violence?  How is it that the leaders of democratic countries remain indifferent in the face the flow of the blood and tears of the victims, of each and every Tibetan who has died through self-immolation?” Chen asked.  “Citizens of the world with a conscience ought to respond by speaking out for justice.”

ChinaAid founder and president Bob Fu, a close friend of Chen, said, “We applaud Chen Guangcheng’s courage to continue to stand up for victims of human rights abuse and religious freedom violations in China.  Referring to the most recent incidents, Fu said, “the latest harsh 39-month sentencing of Chen’s innocent nephew Chen Kegui and the 12-year imprisonment for Christian democracy activist Li Bifeng should alarm the Obama administration and international community and put them on alert that it is time to set a new course for human rights and trade with China.”

Chen, a self-taught lawyer who championed farmers, the disabled and other marginalized groups, was imprisoned for four years and three months for exposing the violent measures used to enforce China’s one-child policy, including forced abortions and involuntary sterilizations that in his county alone in 2005 numbered 130,000.  Following his release in September 2010, Chen, his wife Yuan Weijing, and their six-year-old daughter were illegally kept under house arrest and deprived of all contact with the outside world.  When Chen and his wife smuggled out a videotape they had secretly filmed in early 2011 and released by ChinaAid showing the conditions they were forced to live in, the couple was subjected to brutal beatings and denied medical treatment.

Reporters and activists, including American movie star Christian Bale, who tried to visit them were roughed up and turned away.  In April 2012, Chen managed to slip out of his house and make his way, alone and undetected, to a rendezvous point with  supporter who drove him to Beijing, where he sought protection at the U.S. Embassy.  His presence there unleashed a diplomatic storm that was finally resolved when Chen agreed to leave China with his family and pursue further legal studies in the United States.

The video transcription in English:

World’s Human Rights Day is drawing near.  First, I’d like to express my gratitude to the people around the world who have shown great concern for China’s freedom, human rights, rule of law, democracy and social justice.  Thank you for your kindness to my family and myself.  Today, I’m standing here because I’m in a free world. Yet, my family in China as well as thousands of my fellow countrymen are still in an authoritarian regime.  They are not free like the Freedom Tower behind me.  It is still under construction, but it won’t take long.  We need to raise our efforts to help them.  The world experienced great changes in the past six months.  Following the Arabic Spring, Burma strides forward towards democracy, with its leader Thein Sein ordering the release of 518 political dissidents.  Cuba has finally loosened up its restriction for citizens traveling abroad.  Unfortunately, the human rights situation in China is in fact getting worse.  This has to garner more attention from the world.  And the United States, in particular, as a beacon of freedom, needs to play a leading role.  The nations in the world should shift their focus from trade to human rights.   The Chinese government made a promise to me, the United States and to the world “To have a thorough investigation of those persecuting me and my family in Shandong for the past several years and to make the decisions public.”  Yet, they have not kept their word.

Because I fled the country, the government officials have enacted revenge on my nephew Chen Kegui and others.  Chen Kegui tried to defend our family, but he was arrested and is still in jail today.

The corrupt officials who ordered his arrest, however, got promoted.  To this day, there has been no news that the Communist Party leaders are willing to change and do the right thing.  They are posing a challenge to humanity, justice and our conscience.

On many “sensitive days,” citizens of conscience in Beijing and other first-tier cities were made to disappear in case they organized any activities.  Now the practice has extended to the third-tier cities.  Tsering Woeser and Liu Feiyue were made to disappear, so was Liu Guohui of Shandong province.  In a society without rule of law, the citizens have no sense of security.  Li Wangyang was killed yet said to have a suicide, which made “I will not commit suicide” a new mantra.  And in fact, in China, no one is safe.  Liu Xia, Hu Jia, Wang Lihong, Jiang Tianyong, Xu Zhiyong, Zheng Enchong, Feng Zhenghu, Liu Ping, Sun Wenguang…these people and many more, under the name of “Rule of Law,” have been harassed and illegally detained for too long.  Hada, Song Ze, Ge Zhihui’s 8-year-old son and her family vanished without a trace.  The Communist Officials at every level continue to act against the state law and humanity.  Which part of China’s law gives the Communist Party such special power?  How can you rule the country with justice when you yourself are crooked?  Dear Mr. Xi Jinping, the whole nation is watching you.

Whether you will follow the call of heaven and people to carry out reform, or kidnap the government and maintain the power of the Communist Party, it is a matter of whether China will have the transition in a peaceful way or a violent way.

Do not send the signal to Party officials that they can continue acting without any restraint.  Do not support the ongoing message that anyone urging them to abide by their own laws will be treated as a state enemy. Aung San Suu Kyi is free now.  When will Liu Xia, Hu Jia, Wang Lihong, Jiang Tianyong and the above-mentioned people be free as well?  Thein Sein has set his political dissidents free.  What about Gao Zhisheng, Liu Xiaobo, Guo Quan, Yang Tianshui, Ni Yulan, Uighur Christian Alimujiang and Qi Chonghuai?  When will these prisoners of conscience be released?  Thein Sein’s open mind won him support from the Burmese people and recognition from the world.  If Thein Sein can do it, yet Xi Jinping doesn’t, obviously it’s not that Xi couldn’t do it, but simply that he wouldn’t.  And that will speak volumes to who he is as a person and as a leader.  And if that’s the case, how can one expect him to restore power to the people or to carry out reform and maintain social justice?  Nowadays, people who defend their rights are abducted and illegally detained.  People like Mao Hengfeng, Wang Kouma, Shen Peilan and Jin Yuehua are sent to labor camps or detention centers.  The violence in maintaining China’s “One Child Policy” still extensively exists.  It is a sin, because life is sacred. The number of self-immolation in Tibet sees almost a daily increase and has exceeded 80 deaths.  The persecution of Falun Gong people and house church continues.  Under the name of “maintaining stability,” all the while the red terror envelops the nation and the “Black Jail” are all over the country.  The stubborn force of Chinese authorities has shown its true face, declaring “I have to stay above the constitution and the law.  What can you do to stop me?  I’m in power.”

How can the international community turn a blind eye to the crimes committed by the Chinese Communist Party in maintaining its power?  How can the leaders of the Free World keep silent, watching the blood and tears of fellow human beings flow, and Tibetans burning themselves?  How can world leaders remain unmoved? Citizens of the world, let your voice be heard in support of justice.

And people of China, we are capable and ought to join together to work for our own rights.  We can rely on our own actions to establish and maintain a fair and just social system.

God help those who help themselves.  Our fate is actually in our own hands.  Here, I would like to call upon our Tibetan brothers and sisters: “Please cherish life and do not choose the path of self-immolation.  Our struggle cannot go on forever and I know that there is a solution out there.  Let us work together to find it, shall we?”  Human Rights Day belongs to each and everyone of us on this planet.  Each individual has his or her rights, and these rights should be respected.  As human beings, we should take actions to vigilantly improve and defend human values.  It is to benefit our long-term and most essential interests and needs, not just through words but more importantly, through action.

As Human Rights Day is drawing near, let us put in all our efforts to defend human rights. Thank you.