Editor’s Note: In recent years, government forced evictions and demolitions in China have been widely characterized by massive mobilization of government forces and surprise “attacks.” Even so, the sudden and violent massive pre-dawn action by the Jinxiang county government in coastal Shandong province still managed to shock people.

(Photo shows the confrontation between police and villagers, as a front-loader in the background levels a wheat field in Shandong province’s Weicaiyuan village. Click to enlarge)

(Weicaiyuan village, Shandong—March 6, 2012) A thousand police with 100 police vehicles and dozens of heavy machinery launched a massive lightning-strike, pre-dawn land grab in China’s “Garlic Town,” bulldozing a wide swath of farmland in the latest development in an ongoing yearlong dispute between the local government and the farmers it is trying to force to move into shoddy apartments.

The pre-dawn government maneuver occurred without any warning at 6 a.m. Feb. 28 in Weicaiyuan Natural Village, Gaozhuang, Yushan Development Zone, Jinxiang county. The county is famous worldwide for being “Garlic Town” because of media reports of its garlic output, valued at 150,000 yuan ($23,750) per hectare ($9,600 per acre).

Villagers woke that morning to find their village surrounded by about 1,000 police officers, all roads leading to the village blocked, and 100 police vehicles and a fire truck parked in the plaza in front of Hongda Hospital, located adjacent to the village. Curious passersby who took photos with their cellphones had their phones confiscated by police.

A dozen construction vehicles, including 20 front-loaders, drove into the village. Villagers recognized that the leader of the action was Liu Zhunlu, deputy director of the county People’s Congress Standing Committee, and a deputy police chief whose name they did not know.

Desperate to protect their land from being bulldozed, the farmers all lay down in the wheat fields. Liu and the deputy police chief ordered the police to bodily remove the farmers, four policeofficers to a man, and throw them into the police vehicles. Villagers Hao Jianguo, Hao Gencheng and Zhou Aimei were detained at the scene. Zhou is an 82-year-old granny, and she also was forcibly removed to a waiting police car. Sixteen other villagers were beaten, including Hu Ailian, Zhang Fengrong, and Yang Xiulan who suffered injuries and had to be transported by ambulance to the nearby privately owned Hongda Hospital. They had to pay for the medical bills on their own.

One of those beaten, villager Hao Xinwei, told police that he had a bad heart and had had three heart bypasses, but the police still fought him to get hold of the two cellphones he was using to take photos. Wanting to preserve the evidence, Hao hurled his phones to the ground, shattering them, then threw the pieces in a pond. The police dredged the pond for the phones, lest any evidence of the government land grab remain in the villagers’ hands. As a result of the rough police treatment, Hao had a heart attack and was taken by ambulance to the hospital for emergency treatment. Police snatched five cellphones used by villagers to take photos, but some villagers still managed to keep some photos of the land seizure and posted them online on the Youku site. 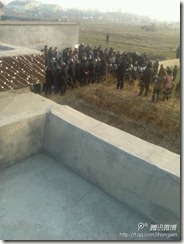 (Helmeted special armed police at the scene of the government land grab. Click to enlarge)

Weicaiyuan, a rather prosperous village adjacent to a city in Jinxiang county’s Yushan Development Zone, has 24 hectares (60 acres) of farmland and 220 villagers. The village has a long history of fruit-growing fruit, especially the “Gaozhuang” pear, which is one of Shandong’s famous fruits. The Feb. 28 police action destroyed about 300 pear trees, 200 peach trees, 60 apricot trees, 300 grapevines and 7 hectare (more than 17 acres) of wheat crop. The 20 front-loaders bulldozed the orchards and fields, and the debris was loaded onto the four construction vehicles and hauled away. The wheat field was totally flattened. Because the villagers refused to sign the compensation papers, to date they have not received a penny of compensation for their loss.

Weicaiyuan is part of the Gaozhuang Administrative Village, a new-style agricultural community still under construction. The project, called “Modern City,” was built with investment from Jining Zhongcheng Property Acquisition Ltd., Corp. Phase one of the project—six rows of six-story apartment buildings erected on 6.66 hectares (16.5 acres) of land—is already complete. Of the 432 apartments, only one-tenth were given to farmers on whose land the buildings were built, and the rest were sold at high prices. Modern City’s shoddy construction resulted in three failed attempts to pass inspection. A month after construction was completed, two stairways had already collapsed. During rainstorms, water leaks from the sixth story all the way to the ground floor. Because the standing water in the basements cannot be drained, the farmers use them as ponds to raise ducks. These farmers had not only traded their farmland and one-story homes for apartments that leak in the rain, but they also lost their livelihoods and are forced to do odd jobs or start small businesses in order to make a living. For these reasons, Weicaiyuan farmers dread having to move into these apartments. Protracted negotiations over relocation and land appropriation have dragged on for more than a year, and to date, the farmers have not received a single document from the government. 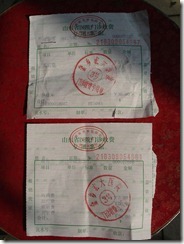 (Ambulance bills that those injured by police during the land grab had to pay out of their own pocket. Click to enlarge)

Jingxiang county has a cyclical economy dependent on the price of garlic. Its current prosperity is an artificial result of the soaring price of garlic that in 2009 rose by almost 10 times. In the past two months, Jinxiang country has been under the media spotlight because of illegal electronic transactions in the garlic futures market. Some 7,000 garlic merchants from all over China converged on the county, city and provincial governments to protest being conned out of 1 billion yuan ($158 million) in futures margins by 300 crooked businessmen.

In a “perfect-storm”-like scenario, the Jinxiang government’s predicament and the accompanying chaotic social order created a favorable political climate for farmers to fight against “being forced to move into apartments”. The Jinxiang government’s greatest fear was that the protesting garlic merchants and the local farmers would join forces in defending their rights. This also explains why special armed police have been posted every day outside the Jinxiang petitioners’ office separating farmers from the merchants. The locals believe that it was precisely to nip this in the bud that the government took such drastic measures. 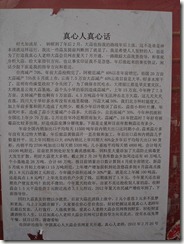 The villagers are saying, “What the Japanese invaders dared not do, the Communist government had no qualms about doing. Their goal is to raze the entire village and herd the villagers into apartments.” The villagers have appealed to Beijing human rights lawyer Li Jinglin for help, and Li immediately went to the village. He has reportedly called on several journalists and lawyers, including backup lawyers Li Heping, Li Xiangyang, etc. to meet him at the village in a show of support.

This report was based on on-site interviews. News developments posted online by villagers are below.

Jinxiang county’s entire police force and comprehensive law enforcement agents together have surrounded Weicaiyuan, Gaozhuang village, which faces the east gate of Hongda Hospital. There were over a hundred police vehicles and as many as 1,000 policemen. They used 11 front-loaders to forcibly bulldoze the villagers’ farmland.
www.jinxiang114.com/BBS/thread-136274-1-1 … an hour ago – Baidu Snapshot, Yushan Developmental District, Jinxiang County

More than a hundred police vehicles are parked at the gate.

They used 11 front-loaders to forcibly bulldoze the villagers’ farmland.

Many villagers are protesting. In the chaos, five people were rendered unconscious and were sent to the hospital.

No updates on what’s happening now.
Hundreds of mu of crops were ruined. [1 mu of land is equivalent to 1/15th of a hectare or 0.16 acre]

None of the villagers want to sell their land. Not a single person signed an agreement.

The police did it by force.

Getting video clips and photos was not easily.

Many villagers’ cell phones and cameras were forcibly confiscated by the police when used to take pictures.

Sun Chao’s wife’s phone number: 15963041333 (Sun Chao, the former party secretary of the development zone’s management district was illegally detained by police for two years because had responded to villagers who got down on their knees pleading for help and had appealed to the county government on their behalf. He was released this past January, just before Chinese New Year.) 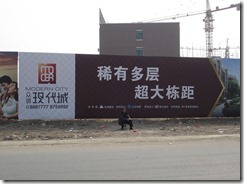 (Photo, left, of a billboard for the “Modern City” project) 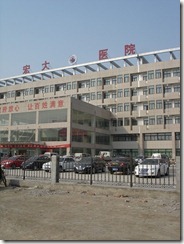