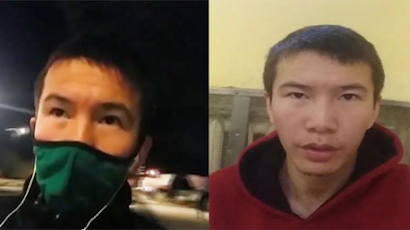 (Jiliyuzizhen, Ghulja, Ili, Xinjiang Province—Nov. 13, 2020). When ChinaAid Association learned that Yi Li Sen, an ethnic Kazakh man from Xinjiang Province, had traveled through Central Asia seeking asylum, Pastor Bob Fu, founder of ChinaAid, immediately contacted the U.S. Department of State to initiate a rescue operation. As a result, the American government stepped in, and officials expect 23-year-old Yi Li, who holds a Chinese passport, to not only escape China’s persecution, but to also secure refuge in the West.

In a video interview with Radio Free Asia, when asked about his experience, Yi Li responded: “I am currently in Ukraine’s western city Lviv, a border city only seventy kilometers away from Poland. I had planned to smuggle into Poland’s borders and cross the country into Frankfurt or Berlin to seek political asylum inside Germany.”

Yi Li also said in the video: “Today’s date is October 22, 2020; the weather is freezing. The chances of smuggling are very slim here; close to zero. Ukraine and Poland have been socialist countries. Being caught meant the possibility of severe beating and repatriation.”

Prior to being captured, Yi Li had initially planned to escape to Poland. He had fled to the Central Asian country Kazakhstan, then to Lviv, Ukraine. He had planned to continue towards Poland’s border. His freedom quest abruptly dissipated, however, when Ukrainian authorities captured him inside Ukraine.

Geng Shuang, the Deputy Permanent Representative of China to the United Nations (UN), reasons that if the Chinese government identifies detainees like Yi Li as terrorists or potential terrorists at the UN Security Council, this suggests China is a terrorist state because China has millions like Yi Li. If they are not categorized this way, they should not be detained. The Chinese government’s act of imprisoning millions of its citizens without due process, in itself, constitutes an act of terrorism. At the UN Security Council on August 24, Shuang stressed that the Chinese government’s policy in Xinjiang is blocking counterterrorism and de-radicalization.

As the Chinese Communist Party (CCP) threatens Xinjiang’s ethnic identity, the Trump administration is currently considering labeling the Chinese government’s acts in Xinjiang as “ethnic cleansing.” China’s repression of Uighurs like Yi Li has led to the imprisonment of millions in concentration (re-education) camps.

In addition to advocating for and financially assisting Yi Li, as well as others the CCP targets, ChinaAid calls for China to stop its large-scale persecution towards the ethnic minorities and religious believers of the Kazakhs in China. China needs to comply with the UN’s Declaration of Human Rights.

According to Pastor Fu, “After we contacted the U.S. Department of State regarding Yi Li, the state department has come forward and coordinated with Ukraine and the United Nations (UN). The Ukrainian authorities have promised to stop the repatriation of Yi Li Sen. At the same time, the UN refugee agency’s lawyer has met with him.

This incident also shows that in refusing to let his plan to escape China crumble, Yi Li found ChinaAid and others willing to respond to his call for help.