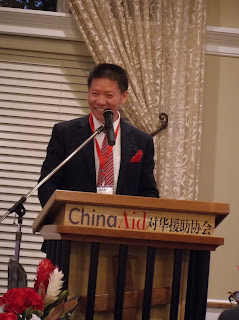 The dinner, which is held yearly, discussed China’s human rights and religious freedom abuses. ChinaAid President Bob Fu served as the featured speaker, and Eric Foley, who founded Voice of the Martyrs Korea and works with persecuted North Koreans and Chinese Christians, gave a testimony describing the importance of paying attention to persecuted Christians in China.

Foley, whose work with North Koreans intersects with work in China because of the amount of North Koreans living in the country, believes China’s oppression of Christianity is the most critical situation to which modern Christians should pay heed. He described how persecuted Chinese Christians can feel isolated and uncared about from the rest of the world. In particular, he spoke of the family of Li Xinheng, a Chinese missionary martyred in Pakistan. After their son’s death, the Chinese government restricted the information his parents received about him and endeavored to prevent them from interacting with members of their church, leading them to feel “cut off.”

In addition, ChinaAid awarded the dissident Chen Wei, Early Rain Covenant Church, and a Chinese house church pastor who must remain anonymous the annual Courage Award for their brave protection of Chinese citizen’s rights and freedoms, even in the face of adversity. Another candidate, who is currently imprisoned in China and also requires anonymity for the safety of him and his family, was given the first-ever Lin Zhao Freedom Award.

For more information on the awards and their recipients, please click here.