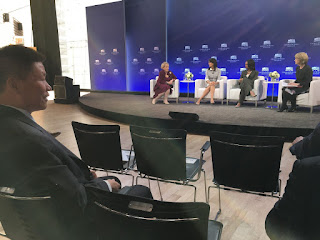 
(New York—Oct. 19, 2017) Prominent leaders and pro-democracy voices gathered for The Spirit of Liberty in the World conference, hosted by the George W. Bush Institute today in New York City, in order to discuss the unique challenges freedom and democracy face in the U.S. and worldwide.

During the conference, President Bush issued a clear warning against underestimating the damage done by Chinese Communists and Russia to the United States but reassured the audience that freedom would gain the victory. Rice added that weakening advocacy for democracy and freedom undermines America’s “greatest interests.”

Fu held a private meeting with Secretary of State Albright, who partnered with President Clinton 20 years ago to rescue his family, who sought refuge in Britain-governed Hong Kong after his wife became pregnant in violation of the then-in-place one-child policy. You may read more about Fu’s story in his autobiography, available for purchase here.

Fu’s trip also included a visit to Dr. Gao Yaojie, who earned the name “the first Chinese anti-AIDS” doctor and is admired for her fearless care of vulnerable people groups. When she faced the loss of her freedom eight years ago, Fu rescued her.
To access full video coverage of the conference, please visit the George W. Bush Presidential Center’s website.

ChinaAid attends such conferences to engage in the broader dialogue surrounding the challenges of implementing freedom around the world, including in China, and further advance religious freedom, human rights, and rule of law.