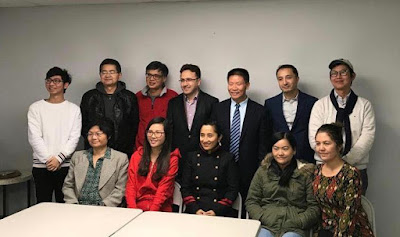 The meeting between Fu and Nicholas J.C. Snyder, Pence’s Special Advisor for East Asia, Southeast Asia, and the Pacific, highlighted Cao’s case in hopes to secure his release.

Cao was originally taken into police custody in March 2017, when he and his colleague, Jing Ruxia, were crossing the border between China and Myanmar, where they worked as missionaries. Even though Cao had made the crossing many times prior, with the knowledge of Chinese officials, he was arrested and sentenced to seven years in prison for “organizing illegal border crossings.” After his arrest, a Chinese-backed militant group began persecuting his fellow missionaries, who are still located in Myanmar, indicating that they all are being targeted for their faith rather than a crime.

His wife and two sons are both U.S. citizens, and he pastored a Chinese church in North Carolina after moving to the States. Since becoming a missionary, he has established Christian schools for more than 2,000 impoverished minority children in Myanmar’s Wa State and is highly regarded in the area for his good deeds.

On Friday, Fu also held a “Bearing Witness” meeting at Emmanuel Baptist Church in Manassa, Virginia, where persecuted pastors and Uyghur people who have suffered under the harsh treatment of ethnic minorities in China’s northwestern Xinjiang shared their stories. In a Facebook post, Fu said that “at least 1 million” Uyghurs have been imprisoned for their race and Muslim faith and forced to live in jail cells “so tiny that they have to separate into three groups in order to sleep in rotation each day. Many already died due to torture.”

Through these events, ChinaAid hopes to further expose the abuses suffered by religious people in China and promote human rights, religious freedom, and rule of law.