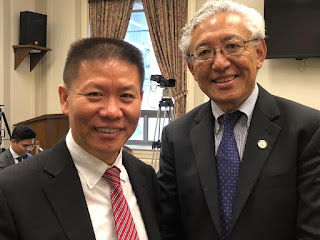 (Washington, D.C.—Sept. 27, 2018) On Thursday, ChinaAid President, Dr. Bob Fu, testified before the United States House of Representatives Committee on Foreign Affairs hosted by the Subcommittee on Africa, Health, Global Human Rights, and International Organizations. The subject was “China’s War on Christianity and Other Religious Faiths.”

In his speech, Fu highlighted recent persecution cases such as the unfair closing of the Zion Church Beijing and the re-education camps for Uyghur Muslims. He emphasized the systematic tactics of the Chinese government in the last few months against all of China’s official and unofficial religious gatherings across multiple religions.

He also drew attention to American tech companies such as Facebook and Google being complicit with the Chinese regime by preventing online free speech.

He said, “In the current situation, the United States must take the leadership role to declare that such an attack on freedom of religion will not be tolerated. Many Chinese Christians and I personally view the United States as the only one that can stand up for our rights without being blackmailed into silence.”

Ultimately, he recommends the United States apply sanctions against China based on religious freedom violations.

ChinaAid seeks to stand with the persecuted faithful in ChinaAid by advocating on their behalf, such as though panels like this, in order to promote religious freedom, human rights, and rule of law.