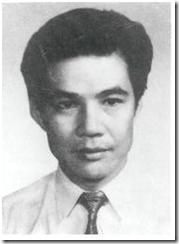 (Washington, D.C.–May 7, 2013) ChinaAid has redoubled its efforts in championing the case of Christian prisoner of conscience Peng Ming, making the rounds of the nation’s capital with Peng’s family to draw attention to his illegal conviction and failing health behind bars.

The recent effort was part of ChinaAid’s ongoing mission to push for freedom of religion and promote progress in establishing the rule of law in China and to advocate on behalf of all the prisoners of conscience in China’s prisons. ChinaAid has for many years been appealing for the release of such political prisoners as Gao Zhisheng, Chen Guangcheng, Alimujiang, Wang Bingzhang, Liu Xiaobo, Guo Quan, Yang Tianshui, Zhu Yufu, Liu Xianbin, Peng Ming, Chen Xi, Chen Wei, Yang Rongli, Ni Yulan, and others while providing humanitarian assistance to their families through various channels.

Peng was first the founder of the China Development Federation, and later, in the United States, he founded the China Federalist Party; he has long been committed to the efforts to end one-party dictatorship in China and to realize free and democratic universal suffrage. Like Wang Bingzhang, the prominent Christian and dissident Peng Ming was secretly lured by special agents of the Chinese Communist government to Myanmar, where he was kidnapped on May 28, 2004 and transferred to China. On October 12, 2005, a Chinese Communist court in Wuhan, Hubei province convicted Peng of “forming and leading a terrorist organization” and sentenced him to life imprisonment, with deprivation of his political rights for life. The conviction of Peng by the Chinese authorities was totally illegal and the sentence violated Article 6 of the Chinese Criminal Law regarding “territorial jurisdiction.”

Peng’s political views fall entirely within the exercise of freedom of speech and freedom of assembly, and furthermore, his activities all took place outside Chinese territory, with no resulting consequences occurring within China’s borders. This conviction also violates Article 7 of the Chinese Criminal Law regarding “personal jurisdiction.” This is because. Peng was designated by the UN High Commissioner for Refugees (UNHCR) as an international refugee who was resettled in the United States and is not a Chinese citizen. Therefore, the Chinese Communists have no right to sentence Peng to life imprisonment pursuant to Article 120 of the Chinese Criminal Law regarding “forming and leading a terrorist organization.” Neither Peng’s refugee status nor his viewpoints or actions fall within the scope of this article. The U.N. Working Group on Arbitrary Detention passed a special resolution on this case, concluding concluded that Peng’s detention and sentence are politically-motivated and constitutes arbitrary detention, and has demanded that the Chinese government correct this error in applying the law.

After he was sentenced, Peng was immediately thrown into Han Yang Prison in Hubei to serve his sentence. In 2011, he was transferred to Xian Ning, where he remains today. Peng’s sentence of life imprisonment has not been changed to a fixed-term imprisonment, and to date, he has already been in prison for nine years since he was illegally arrested and sentenced. Although Peng, a Christian, remains committed to regular prayer, and also writes and exercises to stay healthy, he has developed severe heart disease and some other illnesses as a result of torture, and his health is getting worse and worse. Manuscripts of several books that he has written have also been confiscated. The Chinese Communist authorities have also deprived Peng’s basic rights to see doctors and hire lawyers. All of Peng’s relatives living overseas, including his parents, sister and children, have tried to apply for a visa to visit him in the prison, but all were rejected or they were forced back when transferring planes in Shanghai. It is easy to see that when the Chinese Communist authorities use terrorist methods against innocent political prisoners of conscience like Wang Bingzhang and Peng Ming, their true motive is to let them die eventually in prison. 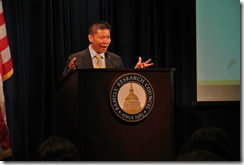 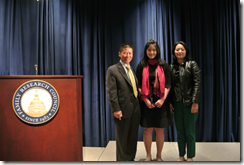 On the morning of April 24, Fu spoke to the Family Research Council, recounting cases of serious religious persecution and human rights abuses in China over the past several decades. Then, he recounted the experience of Peng and his current situation, and introduced Nie Ying and Peng Jiayin, telling the audience the family’s hopes. Fu’s remarks were broadcast live over the Internet. Some NGO leaders and U.S. Treasury Department officials were in attendance and asked some questions. Then Fu was interviewed by Dr. Tony Perkins, president of Family Research Council, and he focused on the serious problem of religious persecution in China and what Americans can do to help promote freedom of religion in China. (photo above) 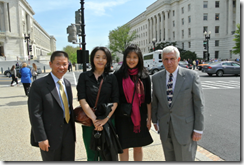 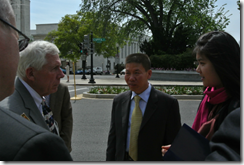 In the afternoon, Fu, Nie Ying, and Peng Jiayin met with Congressman Frank Wolf (R-Va.), who several years ago had helped Peng’s case. Wolf said he would continue to try to help Peng’s family win his freeedom (photos above). The next morning, Peng Jiayin and Nie Ying visited Senator Sherrod Brown (D-Ohio), chairman of the Congressional-Executive Commission on China. 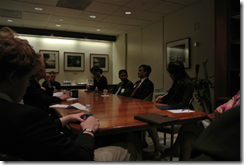 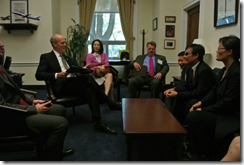 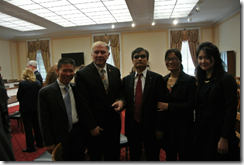 At 10 a.m., Pastor Fu brought Chen Guangcheng, his wife Yuan Weijing, Peng Jiayin and Nie Ying to the offices of the Washington Post, where they met with Editorial page editor Fred Hiatt and other editors and reporters. Hiatt interviewed Peng Jiayin and Nie Ying about Peng Ming’s case. At noon, the group met briefly with Congressman Mr. Steve Chabot, a member of the United States House Foreign Affairs Subcommittee on Asia and the Pacific and chairman of United States House Foreign Affairs Subcommittee on the Middle East and North Africa. They told him about Peng Ming’s case and the current urgent situation (photo above). In the afternoon, the group met with Democratic Congressman Rick Larsen, founder and co-chairman of the Congressional U.S.-China Working Group and a member of the Human Rights Caucus and Internet Caucus. (photo above right) 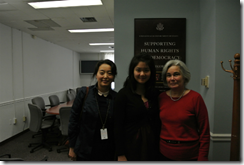 On April 26, Fu brought Peng Jiayin and Nie Ying to the State Department to meet with Ms. Susan O’Sullivan, a senior official in the Bureau of Democracy, Human Rights and Labor, Office of East Asia and Pacific Affairs, and other officials. Peng Ming’s family told them about his urgent situation in prison and expressed their hope that Peng would be allowed to get medical treatment as soon as possible to control his worsening heart disease and that the U.S. government can make some efforts in winning Peng’s early release.

For many years, ChinaAid has been committed working for the early release of prisoners of conscience sentenced and imprisoned by the Chinese Communists for religious reasons or for exercising their freedom of speech and freedom of assembly. However, with the worsening of human rights status in China, these efforts have yielded few results. For instance, Wang Bingzhang, who like Peng Ming, was committed to the democratization of China, was kidnapped and sentenced to life in prison by the Chinese Communists; Gao Zhisheng, who advocated freedom of religion and fought for the rights of Falun Gong practitioners, has been brutally persecuted; Alimujiang was sentenced to 15 years in prison by Xinjiang authorities for believing in Christianity; Guo Quan was sentenced to a 10-year prison term by the Chinese Communists for independently founding a political party; Zhu Yufu was sentenced for the third time to seven years’ imprisonment for writing a poem; and Liu Xiaobo, one of the authors of Charter 08, is serving an 11-year sentence for peacefully offering advice. China currently has at least several thousand or several tens of thousands of political prisoners, most of whom are in very poor health and most of their families have also been persecuted. Some prisoners of conscience have died in prison.

For many years, we have been praying for their early release and have been concerned about them. We will not lose our confidence in God’s love for the people of the world and in God’s justice and salvation. ChinaAid is now contacting some international human rights organizations in the United States and bringing together people from all walks of life who are concerned about the human rights condition in China. We will launch new and ongoing campaigns to save China’s prisoners of conscience in China. We look forward to God’s kingdom come, His will be done, on earth as it is in heaven. May God bring His love and righteousness to that land in the Orient and we also hope more people will join in our efforts to save China’s prisoners of conscience.