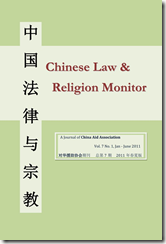 —Walking with the Persecuted Faithful—

Editor’s Note
By “Bob” Xiqiu Fu
In the first half of 2011, as a large number of human rights defenders, dissidents and religious adherents have been illegally detained, forced to disappear, and suffered torture, and with the persecution of the Christian Shouwang Church of Beijing that has lasted over two months, the rule of law and religious freedom in China have experienced the most serious retrogression since 1989.  However, this is not unexpected.   In December 2010 when Dr. Fan Yafeng, founder of the Christian Human Rights Lawyers of China, a prominent constitutional scholar and a church leader, was arrested and suffered torture, it was actually a prelude to a large-scale crackdown campaign.  ChinaAid analyzed and predicted this trend then.  Unfortunately, because of the defiance by the public power of China against rule of law and the passive reactions from the international community on the “Fan Yafeng Incident,” the full-scale crackdown by the Chinese government that started in the first half of this year hasn’t met any resistance, and it is still continuing.

In view of this situation, this 2011 Spring/Summer issue of The Chinese Law and Religion Monitor is comprised of six short theses with the aim of exploring the relationship and mutual reactions between rule of law and religious freedom on the one hand, and civil society and the institution of government on the other.  In the meantime, constructive plans are proposed.
This issue contains the text of two speeches written by speakers of the Forum on Religious Freedom, Rule of Law and Civil Society, which was co-sponsored by ChinaAid and the School of Law of the US-based George Mason University in February 2011.  In the speech titled “On Religious Freedom and Cultivation of a Civil Society in China,” Li Renbing from Beijing points out that two forces in the Chinese society wedged between ordinary citizens and the government, i.e. non-government organizations and the system of rights defense lawyers, are effectively promoting the development of a civil society, and they urgently need special support from the international community.  Zheng Leguo, a pastor from a church in Wenzhou, points out unequivocally in his speech “A General Interpretation of Religious Policy and Tactics in China—Defense of Rights through Legal Means Against Religious Persecution”, that though the Chinese Constitution unequivocally provides religious freedom, the government still adopts the socialist state-church relationship mode of “state controlling religion” because the religious policy is swayed by its political ideology.  The article also describes in details the government’s strategy in controlling the government-sanctioned official churches and in suppressing the house churches.  It also proposes the feasibility of the mode of rights defense through the law.
In “Summary of Academic Seminar of ‘Religious Freedom and Ethnic Harmony’” by Yang Shijian and Dan Zhao (held in August 2010 in Peking University), they summarize the academic discussions with the attendees of the seminar from three perspectives: protection of religious freedom through the Constitution, separation of church and state, and the relationship between many religious and ethnic groups.  They make a special mention of how China is lagging behind the times in its legislation of a religious law, and of the tension between the legal codes and their enforcement that urgently needs a solution.
In his article “Between God and Caesar—A Look at the Relationship between Church and State from the Perspective of the German Churches,” the prominent Chinese freelance writer Yu Jie reviews and analyzes in details the relationship between the churches and the government in Nazi Germany, how the Nazi government turned “Germanic Christianity” into the state religion that supported the Nazis, and the significance of the “Barmen Declaration” promulgated by the Confessing Church that refused to join the state religion.  Finally, he compares the similarities between the churches in the former East Germany and the churches in China.
Shan Chuanhang, a scholar on Chinese house churches, delivered a speech titled “Religious Policy of the Chinese Government on Spiritual Movements.” In his opinion, the traditional concept of the Mandate of Heaven as a sensitive political-religious philosophy has influenced the relationship between Chinese governments and spiritual movements throughout the history of China. Political disagreement in spiritual movements is an area forbidden from public discourse by Chinese government.  Spiritual movements make moral claims about proper human interactions and that can form a challenge to rulers.  That any spiritual movement must not deal with politics in a negative way is therefore often written into the law. Finally, he pointed out that Christianity will influence significantly the future of religious freedom in China.
In his article “Civil Disobedience and the Legal Positioning of Chinese House Churches,” the legal scholar Pastor Liu Tongsu points out that the Chinese house churches are promoting the development and perfection of the legal order through a civil disobedience movement.  The article describes in details the definition of “civil disobedience” and the legal positioning of house churches in China.  Finally, it looks at a vision for the future up the prospect of the future and makes some proposals.
In summary, the central theme of the above six theses is this: A smooth, orderly, and healthy civil society can only be established through the implementation of a legal system that regulates the relationship between religious freedom and political ideology.
ChinaAid will continue to promote religious freedom and improvement of human rights within mainland China.  To achieve these goals will require the joint efforts of all people both in China and abroad in the theoretical exploration and practice of modes of rights defense within the legal system so as to effectively promote the development of a civil society in China.
Pastor Bob Fu
Editor-in-chief, founder and president of China Aid Association
June 30, 2011, Midland, Texas, USA


Table of Contents Editor’s Note………………………..3
Detention Notice for Dr. Fan, 2010  document………………………………..6
On Religious Freedom and Cultivation of a Civil Society in China – text of speech delivered at School of Law of George Mason University on February 1, 2011, Li Renbing…………………7
Administrative Detention Notice Issued to Mr. Liu Jintao document …………14
A General Interpretation of Religious Policy and Tactics in China – Defense of Rights through Legal Means Against Religious Persecution, Zheng Leguo ……………………..15
Summary of Academic Seminar of “Religious Freedom and Ethnic Harmony”, Yang Shijian, Zhao Dan……………………………….38
Notification of Penalties on Du Xianping and Zhao Ximei document ……………54
Between God and Caesar – A Look at the Relationship between Church and State from the Perspective of the German Churches, Jie Yu ……………..55
The Criminal Detention Notice for Pastor Shi Enhao…………….78
China’s Policies Toward Spiritual Movements – Congressional-Executive Commission on China Roundtable, Mark Chuanhang Shan……………….79
Civil Disobedience and the Legal Positioning of Chinese House Churches, Liu Tongsu ……………….89
© China Association, Inc. (ChinaAid). All rights reserved.
Click the link to view or download free e-copy of the journal:https://docs.google.com/viewer?a=v&pid=explorer&chrome=true&srcid=0B_YUgSyiG6aIYTU3Y2ZhODUtYzlkYy00MjM1LTk1NTItZmU0NWU4NDcyNTJi&hl=en_US
Click the link to buy hard copy of the journal:http://www.amazon.com/Chinese-Religion-Monitor-01-06-2011/dp/1463713991/ref=sr_1_2?ie=UTF8&qid=1312221845&sr=8-2