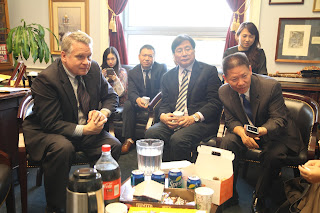 (Washington, D.C.—Oct. 11, 2018) ChinaAid will be speaking at a Chinese human rights and religious freedom briefing today in Washington, D.C., today, testifying to the abuses of the nation’s Communist Party.


Titled “A Final Attempt to Defend Human Rights in China,” the briefing is being hosted by the International Religious Freedom (IRF) Roundtable and the International Religious Freedom Caucus and held in advance of the United Nations Human Rights Council’s upcoming routine review of China in November. It will be held from 2:00 p.m.-3:30 p.m. EST today at 340 CHOB. The official invite references China’s recent persecution cases against religious practitioners, including Christians, Falun Gong members, Tibetan Buddhists, and ethnic minority Muslims, saying it is “critical that religious freedom be raised and highlighted throughout these conversations.”

Grace Kang, a rule of law adviser in the D.C. area, will be speaking on behalf of ChinaAid, making recommendations to U.S. leaders on how to respond to China’s abuses, including targeting persecutors and implementing incremental sanctions on areas in China in which persecution is the most severe.

ChinaAid advocates on behalf of the persecuted at such briefings in order to expose the abuses they are suffering and promote religious freedom, human rights, and rule of law.