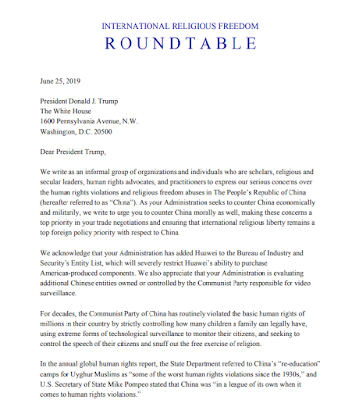 
Correction: A previous version of this report incorrectly stated that the International Religious Freedom Roundtable meets every three months. In fact, it meets several times a month.

(Washington D.C—June 25, 2019) ChinaAid joins a coalition of human rights advocates, religious scholars, and secular leaders in signing a letter calling on the administration of President Donald Trump to make “international religious freedom a top priority in all areas of American foreign policy with respect to China.”

The letter’s authors note China’s inconsistencies with “international human rights and religious freedom norms, standards, and law” as government officials attempt to “sinicize” all religious practices in the country.

Continued erosion of fundamental rights and liberties inside of China threatens “the lives and freedoms of millions more around the world who are subject to autocratic regimes,” according to the letter.

Signatories express appreciation to the Trump Administration as it “seeks to counter China economically and militarily,” partially through restrictions on Huawei’s ability to purchase components produced in America and evaluation of Communist Party-affiliated entities responsible for video surveillance.

The IRFR meets several times a month in the U.S. Capitol to meet and share information with a purpose towards protecting and promoting “freedom of religion, conscience, and belief in the U.S. and abroad.”

The Roundtable’s goal is to “reverse the rising tide of restrictions on religious freedom that has been spreading across the world.”

The IRFR letter comes one day after five rights groups expressed satisfaction towards participants in the ChinaAid co-hosted Taiwan International Religious Freedom Forum who collaborated to issue a Declaration on the Persecution of the Uyghurs.