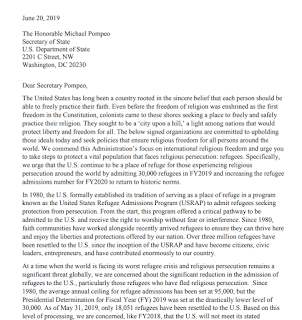 
(Washington D.C. – June 20, 2019) China Aid is one of 42 signatories on a letter addressed to U.S. Secretary of State Mike Pompeo asking the government to strengthen refugee resettlement for those experiencing religious persecution.

The letter to Secretary Pompeo is dated June 20th, which also marks World Refugee Day. Recently released information from the Office of the United Nations High Commissioner for Refugees (UNHCR) continues to paint a dire picture for global refugees.

According to the UNHCR, worldwide populations of forcibly displaced persons increased by 2.3 million last year to 70.8 million. An estimated 13.6 million were newly displaced in 2018 due to conflict or persecution.

In light of the current administration’s emphasis on religious freedom, signatories to the letter request officials to admit 30,000 refugees in FY (fiscal year) 2019 and further increase admitted numbers in FY2020 so the United States can “continue to be a place of refuge for those experiencing religious persecution around the world.”

The call for increased admittances comes amid concerns about reductions in refugee admission, particularly for people fleeing religious persecution.

The letter notes how only 18,051 refugees have been resettled in the United States as of May 31st, a figure, based on current estimated processing levels, which will not rise enough meet the Presidential Determination for Fiscal Year (FY2019) of 30,000 refugee admissions.

Signatories to the letter, who include the National Association of Evangelicals, the U.S. Presbyterian Church, World Relief, and the Southern Baptist Ethics & Religious Liberty Commission, agree the acceptance of refugees demonstrates a commitment to religious freedom and shows a willingness by the United States to “protect those who are persecuted because of their faith.”

Aside from Secretary Pompeo, the letter was sent to Vice President Mike Pence, Ambassador- at- Large for International Religious Freedom Sam Brownback, and pertinent officials inside the State Department.