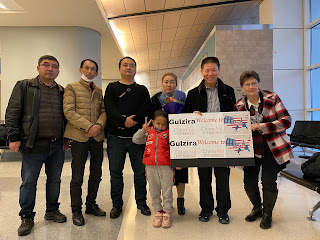 (Midland, TX—Feb. 9, 2020) After years of ethnic and religious persecution by the Chinese Communist Party, China Aid Association warmly welcomes Gulzira Auelkhan, her husband, and their 7-year-old daughter to the United States where they have been granted humanitarian parole.

Below is the full press release that tells some of Ms. Auelkhan’s experience as a prisoner in the camps in the Xinjiang Uyghur Autonomous Region.
###
For immediate release
February 9, 2021
China Aid Association
Contact: [email protected]
(Midland, TX) China Aid Association welcomes Gulzira Auelkhan and her family to the United States today where they have been granted humanitarian parole status.
Gulzira, a 41-year-old Kazakh woman, is a former detainee in the Chinese Communist Party’s concentration camp system in the Xinjiang Uyghur Autonomous Region. She was detained for 16 months in three separate camps where she experienced both psychological and physical torture and witnessed a horrific system of organized rape and forced prostitution.
Born in Xinjiang, she moved to Kazakhstan in 2014 and became a resident. In July 2017, she returned to China to visit her hometown where she was arbitrarily arrested three days later. Accused of having “improper thoughts” after being interrogated by Chinese police, she was sent to a 15 day “reeducation” which was eventually extended to a year by a confession signed on her behalf by the head of police without her knowledge.
Her time in the prisons was marked by extreme surveillance, emotional abuse, and physical beatings at the hands of the Chinese Communist Party guards. According to a recent shocking BBC report, Gulzira was forced to strip female prisoners naked and handcuff them in a room, before leaving them alone with Chinese men. Unable to intervene, she said the Chinese men “would pay money to have their pick of the prettiest young inmates.”
Gulzira was detained in the camps on July 15, 2017 and released on October 7, 2018. Forced to remain in Xinjiang by authorities, she was sent to work in a glove factory only ten days after her release. In January 2019, she was allowed to return to Kazakhstan and reunite with her family. ChinaAid and a partner organization, Atajurt Kazakh Human Rights, helped relocate the family to a third country and have been providing medical treatment and other recovery support for Gulzira and her family.
An estimated 1-3 million Uyghurs, Kazarks and other Turkic ethnic minorities are being held in “reeducation camps” for arbitrary reasons as simple as growing a beard, wearing a veil, or having a home with a “dense religious atmosphere.”  On January 19, 2021, the US Department of State declared the gross human rights abuses committed by the Chinese government as genocide citing evidence of forced sterilizations, torture, and an intricate forced labor system.
“We are thrilled to be able to have Gulzira, her husband, and their 7-year-old daughter arrive safely in the United States with the help of ChinaAid’s sponsorship and the State Department’s facilitation,” Dr. Bob Fu, Founder and President of ChinaAid, said of the family’s arrival. He continued, “Gulzira’s courage in sharing her cruel treatment in the camps shows such admirable resilience. After years of separation and unspeakable turmoil, I hope and pray they will be able to find safety and rest in west Texas.”
ChinaAid will continue to work with government agencies and other NGOs to protect the victims of the Chinese Communist Party’s war on religion and walk with the persecuted faithful.
###
ChinaAid exposes abuses in order to stand in solidarity with the persecuted and promote religious freedom, human rights, and rule of law. If you wish to partner with us in helping those persecuted by the Chinese government, please click the button below to make a charitable donation.