The idea of a transAtlantic human rights alliance on China was conceived by Fu, and Chen publicly called for it at the alliance’s first activity, jointly organized by ChinaAid and Freedom House, in March in Washington, D.C.  The event was attended by Edward McMillan-Scott, vice-president of the European Parliament, and U.S. Congressional leaders.

The trans-Atlantic pact aims to unite all the elements in the West, both from the political arena and among ordinary people, that are concerned about and committed to the promotion of human rights and the rule of law in China.  It also seeks to break down the pacifist political notion that “economic diplomacy and dollar diplomacy can solve all problems.”

The just-concluded three-nation tour of continental Europe was packed with high-level visits and was an encouraging development in solidifying the formation of the trans-Atlantic human rights pact.  The delegation is now in Britain for the second leg of its European mission.  The continuing pursuit of freedom and justice and upholding of universal powers by the international community acting in concert will surely have a great impact on the civil development of Chinese society.

Chen was one of the 2013 keynote speakers at the three-day Oslo Freedom Forum (www.OsloFreedomForum.org) which opened on Monday (May 13) and was attended by hundreds of the world’s most influential dissidents, innovators, journalists, philanthropists and policymakers.

Chen was the first keynote speaker to address the gathering on Tuesday morning at the Christiania Theater. Using as examples both his own experiences and a case that had developed just that morning in which 11 human rights lawyers were illegally detained and one was badly beaten for visiting an illegal “black prison” in Sichuan province, Chen talked about a growing awareness among ordinary Chinese to the possibility of defending their rights which will lead to the inevitably of peaceful reform.
Chen said the international community should join hands and stand united to promote freedom, human rights and the rule of law in China. His speech elicited sustained applause from the forum attendees, which included representatives from more than 150 media organizations.

When the delegation arrived in Oslo on Monday (May 13), Fu, Chen and the other delegation members attended a cocktail party hosted by the Oslo mayor for forum attendees. In his welcome remarks, the mayor gave a brief history of Oslo’s support of human rights and the history of the Nobel Peace prize. 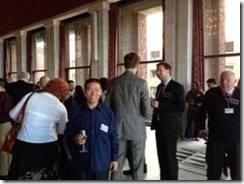 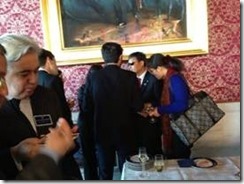 At the cocktail party, rights defenders from Venezuela, Cuba, Bahrain and India came to greet Chen and his wife, Yuan Weijing, as well as the secretary-general of the Nobel Peace Prize Committee, who explained that the committee was undecided about its 2010 award winner selection until the Chinese government imposed a long sentence on veteran dissident Liu Xiaobo. He jokingly said the Chinese government helped the committee make its decision, which was to pick Liu over Chen and Christian human rights lawyer Gao Zhisheng, who were also nominated for the Peace Prize. Fu suggested that naming all three joint Nobel Peace Prize winners would have been better.

While in Oslo, the delegation also hosted a press conference attended by more than 150 reporters, who questioned Chen about the status of human rights in China and the situation of his extended family still in China. Norway’s largest paper ran a front-page report on Chen’s visit with large photos on the inside pages.

At a forum welcome banquet, the U.S. ambassador to Norway, Barry B. White, told the delegation that Chen has been an inspiration to all the forum attendees to work for human rights and freedom.

In Brussels on Wednesday (May 15), the delegation was personally greeted on arrival at the airport at 9 a.m. by Edward McMillan-Scott, vice president of the European Parliament responsible for democracy and human rights. At 11 a.m. presentation to the Alliance for Liberals and Democrats for Europe, Chen urged European governments not to sacrifice human rights and universal rights for economic interests in their China policy and relations. He also answered questions from the more than 70 attendees, including journalists.

The presentation was followed by a hearing specially organized for Chen by the European Parliament called “Inevitable Change For China. A Testimony by Chen Guangcheng” and chaired by McMillan Scott, who gave a special introduction to the work of ChinaAid, praising its efforts over the years to promote freedom and the rule of law in China and to support the work of people of conscience. Fu was invited to sit on the rostrum with Chen during the hearing.

At the hearing, McMillan Scott also announced an important European Parliament decision: the creation of a new freedom award, which was coordinated by ChinaAid and Human Rights Watch.

In his testimony, Chen described the rapid development of civil society in China today, explaining that while the overall human rights situation was deteriorating, but there has been great progress among civil groups to stand up for their independence and the principle of freedom and to fight back.

As he had done at a U.S. Congressional hearing, Chen also submitted to the European Parliament his list of the 44 Chinese officials who have been persecuting him and his family for years and asked that they be barred from visiting Europe.

Lotte Leicht, European Union advocacy director and director of Human Rights Watch, also testified, calling on the European Union to abandon its closed-door human rights dialogue with China. She also submitted a list of 50 names of prisoners of conscience.
After the hearing, Chen and Fu held a press conference attended by a large number of journalists.

At an afternoon meeting with Bastiaan Belder, the Foreign Affairs Rapporteur (Committee draft person) of the EP Report on EU-China Relations, who had come from Holland, the delegation expressed its hope that China could follow the example of Taiwan in democracy, freedom and the rule of law.

Following that, Chen gave a briefing to the Working Group China of the Greens, who expressed the strongest support of the work of China’s human rights defenders.

From 4 to 5 p.m., the group met with Stavros Lambrinidis, former Greek foreign minister and the European Unin’s Special Representative for Human Rights, and desk officers of the China desk and the human rights desk of the EU External Action Service.  Lambrinidis said the EU has been extremely concerned with the situation of Chen’s family, especially the life-threatening situation of Chen’s imprisoned nephew Chen Kegui, who has been denied medical treatment. He said the EU has made repeated solemn representations and lodged protests with the highest levels of the Chinese leadership.

He also revealed for the first time that EU diplomats had tried to visit Chen and his family in January 2001, when they were being held under extra-judicial house arrest in their hometown of Yinan, Shandong province, but were turned away with violent attacks. After the unsuccessful attempt to visit, the EU lodged a strong protest with the Chinese government, which actually responded by saying that Chen was a free man and that it was impossible that any diplomats had been attacked.

At 5:30 p.m., the delegation met with Barbara Lochbihler, Chair of the European Parliament’s Sub-Committee on Human Rights, who said she would be actively monitoring the EU-China human rights dialogue next month in Beijing. The group then went to the Belgian Foreign Ministry and met with the chief of staff and the heads of the departments responsible for China affairs and human rights.

On Thursday (May 16), the delegation met with the group Human Rights Without Frontiers before heading for The Hague in the afternoon.  On Friday morning (May 17), the group visited the International Criminal Court and met with senior judges. 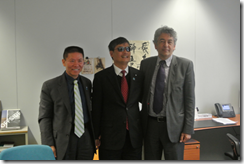 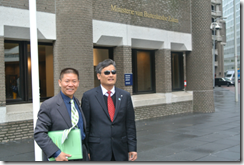 (Chen and Fu outside the International Criminal Court)