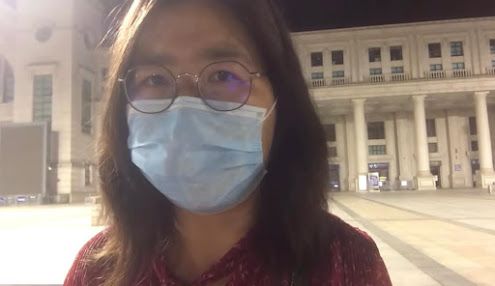 Zhang Zhan, at Hankou railway station in Wuhan, prior to CCP authorities seizing her.
(Photo: ChinaAid)

(Shanghai [not part of a province], China—Nov. 18, 2020) People’s Procuratorate of Shanghai Pudong New District recommends 4 – 5 years imprisonment for Lawyer Zhang Zhan, the fourth Chinese independent journalist and only female to disappear from the public’s eyes after traveling to Wuhan and reporting on COVID-19. Authorities have reported suspecting Ms. Zhang “of the crime of creating disturbances,” accused her of “picking quarrels and stirring up trouble,” and formally indicted her for “spreading false information.” 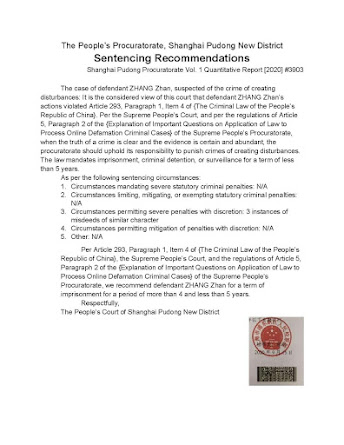 Currently, while detained in Shanghai Pudong New District Detention Center, 37-year-old Ms. Zhang continues a hunger strike. She and her report on the COVID-19 outbreak, first detected in Wuhan, a city with a population of 11 million, have received much public support since December 2019 when the news initially attracted global attention.

On September15, the People’s Procuratorate of Shanghai Pudong New District published the indictment document which claimed that “Zhang Zhan has been spreading false information through WeChat, Twitter, YouTube, and other internet media venues.” The procurator alleged that she also “maliciously sensationalized COVID-19” and “accepted interviews from foreign media outlets.”

Earlier this year, in February at the peak of COVID-19, Ms. Zhang visited a few “sensitive” places in Wuhan. She stated that in mid-February, a crematorium in Wuhan, believed to be cremating the remains of COVID-19 victims, at times worked overtime till the middle of the night.

On March 31, Ms. Zhang uploaded a video on YouTube showing that many patients in Hubei General Hospital had to sleep in the emergency room’s corridors. At that time, to downplay the severity of COVID 19, officials reportedly concealed the fact an overflow of patients with the virus filled hospitals.

Zhang had also visited the outside perimeter of the Wuhan Institute of Virology, accused of being the origin of COVID-19. When filming at that location, Ms. Zhang said military personnel closely guarded the institute, surrounded by high-voltage electric fences.

On May 14, police arrested Ms. Zhang near Hankou railway station in Wuhan. A video recorded late night May 13 reveals that she criticized the government for using the pandemic to persecute human rights. “The main city management method is to threaten and intimidate;” she said, “this is this country or this city’s sorrow.”

Lawyer Li Dawei, also a friend, said that as a devout Christian, Ms. Zhang believes she bears God’s mission. The original intention of her reports, Lawyer Li explained, “was to simply let the world understand the real situation of Wuhan during the pandemic.”

As independent citizen journalists like Ms. Zhang understand and report concerns regarding China, including those related to its judicial system, more citizens will realize changes their country needs. They will understand that those “creating disturbances,” and “picking quarrels and stirring up trouble,” by spreading true information that deserves to be shared, should be free—not imprisoned.